Is Hurricane Nate A Hurricane?

Trick question?  Nope.  Bear with me.

From the 8PM EDT Statement:
Winds 85 mph, forward movement North, or 350 degrees, at 20 mph.   Around the time of Irma, last month, I learned that the winds are reported, the forward motion is already taken into account. It raises the question of just what the winds in Nate really are.

Note that forecasting center advisories already take this asymmetry into account and, in this case, would state that the highest winds were 100 mph [160 km/hr]. [Note: emphasis in original - SiG]

Consider the geometry they describe: 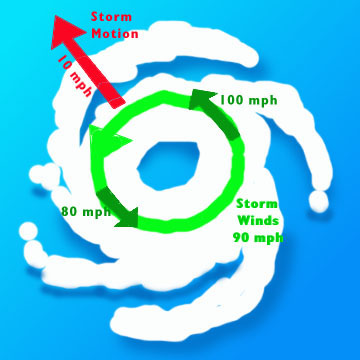 There is only one area in Nate that's a hurricane force storm and that's a small area in the eyewall on the east side of the storm.   Normalized to 10 meters (33 feet) elevation.

Why does this matter?  Follow the money.  Far more geographical area is going to be affected by Nate than will experience hurricane force winds.  Because this is called a hurricane, it will invoke the higher deductibles homeowner's insurance charges for hurricanes.  That's typically a much higher deductible than if this was treated like a thunderstorm, which can easily generate winds that will be seen in most of Nate.  I honestly don't think Nate should be called a hurricane.  If the 85 mph winds were on the north and south sides of the eye wall, and the east side became 105 because of forward motion, that seems more like a hurricane than a storm with a tiny area that reaches 85 because of the geometry of its path.  Which means the NHC would have to describe the winds as if the storm weren't moving.