Anonymous commenter Bob posted an interesting link to my frustrated post about the Las Vegas shooting.  It was a link to FiveThirtyEight for a very reasonable article about gun control and mass shootings.  Of all places you'd never expect to see such a thing, they're one.  I think it's worth reading simply because it's so unusual for a liberal "rag" like them.  The author says mass shootings don't contain much information if the goal is to stop the larger issue of "gun violence" because the only thing they have in common with so-called gun violence is that someone is holding a gun.

Then author Maggie Koerth-Baker goes places I've never seen liberal sites go.  She admits right up front that almost 2/3 of gun deaths are suicides and people find ways to kill themselves if there are no guns.  She talks about the racial disparity of gun violence victims, with 66% percent of murder victims black.  She concludes with:


If we focus on mass shootings as a means of understanding how to reduce the number of people killed by guns in this country, we’re likely to implement laws that don’t do what we want them to do — and miss opportunities to make changes that really work. Gun violence isn’t one problem, it’s many. And it probably won’t have a single solution, either.

It's almost like she wants to solve the problem, not just "do something" as the refrain from all the late night comics goes.  She brings up the uncomfortable subjects (for the liberals) of violence being more common in young black men.  If she would go get John Lott's research showing the enormous concentration of murders in just a small percentage of the counties in the US, and then realize that most of those places already have draconian gun laws, maybe she'd get somewhere.

I can respect the honesty she shows about the problem.  Nobody wants to see mass shootings like we just had, but those shooters seem to be so atypical compared to the usual murders, and nobody wants to see murders of any kind.  I suspect that gun and non-gun murders have more in common with each other than they do with mass shootings.  Yeah, I'd like to get her to drop the whole "gun-violence" term because murder is murder whether it's done with a handgun or a hammer, and I have several of those gripes, but I can deal with honest questioning a lot better than I can live with politics as usual, like Useful Idiot Feinstein dropping a bill to outlaw bump stocks already.  The guy was literally shooting fish in a barrel.  The bump stock probably made his count lower.

Shifting gears, I don't have to introduce Bill Whittle to this crowd.  Bill, of course, left PJ Media a while back and started BillWhittle.com.  I subscribed the first month and renewed this past May.  Bill asks us to think about the mass shootings in a different way.  (Sorry, it was members only video or I'd link).

Most people who have worked in industry have probably heard of Six Sigma programs - I first ran across them in the mid '90s.  The idea is that everything your factory produces should fit within its specification envelope within six standard deviations.  Most "statistical quality control" before Six Sigma said your products should fit within 3 sigma.  The problem is, that makes your factory repair or rework too many rejected products.

Anyone here saying, "Hold on a minute - what's a sigma?"  The term is used for a standard deviation in a Gaussian distribution - the famous "bell curve" everyone has heard of or seen. 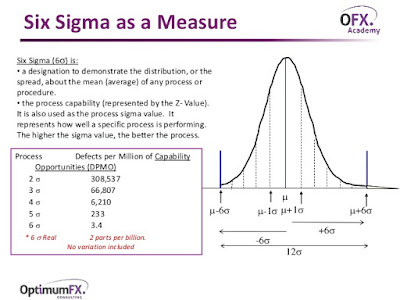 Note that it shows the number of rejected parts in Defects per Million.  In percentages, it looks like this: 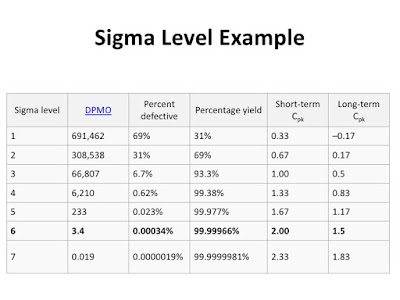 Producing something that worked to 3 sigma meant 93.3% of what you built worked right the first time.   If you're producing big assemblies, that might be acceptable to you.  The six sigma movement is trying to make the product work the first time it's tested 99.99966% of the time. 34 out of 10 million would require either scrapping or fixing, depending on the cost to the company.

What Bill says is that we can consider a mass shooter to be a "defective" human.  How many defects are we producing compared to six sigma?  How many mass shootings have there been in 2017?  I went to this archive, which I know nothing about and found by web search.  I think I recall that the general definition of a mass shooting is 4 or more people killed, and they list mass shootings by more than 4 injured.  By the 4 or more killed convention, I count 16 (by 4 or more injured there are many more: 273).  In a country of 320 million that represents .05 Defects per Million.  That's considerably better than 6 sigma of population being "defective" in that way.

I don't know if it's reasonable to count this as per year, or just how.  Bill seems to think of it as a potential number of shootings per day.  Which is right, per day or per year, or is neither right?  Beats me.  In a day, there are many hundreds of millions of interactions between people, the vast, vast majority of which don't end up in any sort of violence.  On the other hand, when the people calling this a terrible, depraved place start to get to you, it's a little optimistic to think just how stunningly rare these things are.