Are you as sick as I am of hearing that phrase?  It's not just in the last few days, it's always there to some degree.  I'm sick of explaining there is no such thing as a gun show loophole; there are no laws that don't apply at gun shows or to internet sales.  I'm tired of explaining that we already have background checks on all new guns, we don't do them on private sales because it's an individual selling their own property and the Federal Government doesn't seem to get involved in private sales of private property.  States do; if I sell a car, boat or whatever, I have to do a bill of sales and the buyer pays sales tax.  I know of no place where the Fed.gov does that.  I'm really sick of the "why does anyone need (fill in the blank)?? Which we hear from an alarming number of people who are nominally on our side.  Fudds.  Why does anyone need 42 guns?  Why does anyone need 30 round magazines?  I want to ask why does anyone need 42 books? That's also a constitutionally protected right.  Why does anyone need a TV in every room, or a muscle car or you name it.  BFYTW  It's None of Your F**king Business.

I'm even more sick of late night comedians insisting that you and I, as law abiding gun owners, are to blame for mass murder.  No, Kimmel, you sanctimonious copraphage, the only person responsible is the one pulling the trigger.  Not obeying laws is sort of a minimum job requirement for criminals, and if someone is going to commit mass murder, which usually includes suicide, I don't really think minor process crimes are going to slow them.

So since the start of the reports coming in involved this mysterious new term "bump stock" (Paul Ryan said he had never heard of them), they've been on the chopping block.  Several bloggers have already said they'd gladly trade the bump stock for national carry reciprocity and/or the SHARE act and/or lots of other things. I like Aesop's over at Raconteur Report best of what I've seen but I can honestly feel the fear emanating from Slide Fire.  They're selling a perfectly legal product to perfectly willing buyers and they're going to get run out of business because of a lunatic and the cowardly rush to "do something" even if it's not right.

Regular readers will know this is one of my regular rants, but I have a whole bunch of things I consider reasonable gun laws.

Let's start here.  I just bought my Ruger Precision Rifle (The Precious) online from Palmetto State Armory in July.  Any non-prohibited person can walk into their local sporting goods store and walk out with one of those, or a shot gun, or any other long gun just by plunking down their payment, filling out the 4473 and getting the NICS check.  So why did it have to go through a local FFL's hands?  All that did was raise my price $35.  Why can't I fill out an electronic 4473 online and have it shipped directly to my house?  The local FFL had an electronic 4473 I filled out there, why can't I connect to that server from my home and use that form, or connect to one where I bought the gun?  What advantage is there to society from shipping it to an FFL?  They can look at my driver's license and verify I'm me?   Puh-lease.  With today's computer security and ability to forge documents?

In consumer goods, your local camera shop, say, really does have to compete with the big guys in New York. Gun shops don't have that. I can see how local gun shops might really like this setup. They get an easy 35 bucks for filling out the forms and "receiving" the shipment, but I don't think there's any value added to us or society.  There was certainly no value added to me.

If there's a mandatory 3 or 5 day waiting period for a handgun where you live (Florida waives that for Concealed Carry licensees), why can't you order it online and wait 3 or 5 days for UPS to deliver it?  Again, with today's computer security, you could verify age, do a NICS check - anything the local shop can do - online.  I think the waiting periods are all bullsh*t anyway, just another way for government to yank our chains and make it harder than it ought to be.  I've never seen any data that waiting periods have ever done anything except inconvenience legal purchasers.  But, fine, we'll play your infantile waiting game -- now how does waiting 3 days to pick up a gun in my city differ from waiting 3 days to get it delivered by UPS or FedEx?

What possible arguments are there against this?  We can't guarantee security, we can't guarantee that criminals won't order guns online?  Criminals don't have any problems getting guns now while staying out of the system entirely.  If we use strong security, it's as good as what we have.  One time I posted something like this and a commenter said,  "what if your kids used your ID?"  I wouldn't want my kids buying anything under my ID on my computer.  If you can't control your own kids in your own house, I think that's a bigger problem than what they're buying.  Maybe you should be making sure they don't know the combination to your safe and don't know where to find matches.

I guess I'm arguing for a complete end to the FFL to FFL monopoly.  Why not?  Along with that, I want complete deregulation of silencers (SHARE makes them subject to the 4473).  This one actually is for the children.  And for anyone who moves next door to gun ranges or clubs and gets disturbed by the sounds.  From what I read, I don't think I'm dropping my hearing protection even if I have the can, but Show Me the Data.  It strikes me as absurd that we require mufflers on cars or motorcycles but prohibit them on guns.  I know it originally goes back to preventing people from poaching the King's deer, but now it's all about the Hollywood mythology that Hillary espouses.

We should eliminate postal restrictions against mailing of firearms. We can ship them via UPS, or FedEx, why not USPS?  Don't they need every penny of revenue they can get?

Get rid of the stupid “sporting purpose” tests for firearms. The Heller decision makes it very clear that the Second Amendment isn’t about duck hunting. This particularly affects imports.  No restrictions.

Get rid of the stupid laws on short barreled rifles and shotguns.  The idea that a shotgun barrel 18.05" long is fine, but one that's 17.95" is some sort of monster death machine-weapon is just silly.  It's there simply to create law violators.  It's also one of their most enforced laws - probably because it's really easy to measure barrel length.

How's that for a start?  It doesn't take away enough of BATFE's work to close them down, but maybe downsize them 50%? 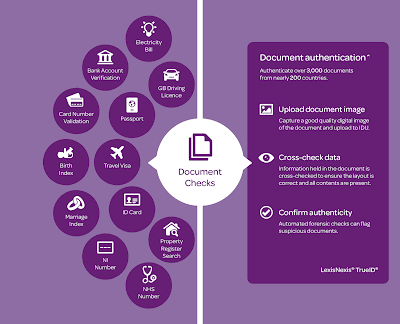 There are many competing companies providing improved online ID verification; this one is from LexisNexis, the database giant.  How is comparing all these documents worse in any way than filling out some lines on a 4473 and showing a driver's license to the clerk at the local FFL?