First, I hope if you're interested in following some quality writing on the Las Vegas massacre that you're reading the Raconteur Report, who has done some really good reporting on it.  I think a worthwhile read for everyone is yesterday's post on a Plea to Stop the Derp.  It's simply too full of weapons-grade snark to quote pieces of.  So just a couple of lines:

That's because you're an idiot, or unfamiliar with Vegas, firearms, and about 48 other facts that many people find to be common knowledge.

We know now Paddock checked in on September 25th, giving him only six f***ing days to get a $#!^load of guns and ammunition to the 32d floor from his car. Seriously, anyone who thinks he carried them out in the open, and up 32 flights of stairs, on his back, is a fucktard. If that includes you, step away from the keyboard.

In Vegas, like many hotels, there are these things called luggage carts:

There's more.  I suspect most of you have seen it since everyone seems to be recommending the blog, but go read if you haven't.

During the power outages from Irma, we ran for a little while on APC Uninterruptible Power Supplies.  One of them seemed to start giving off the unmistakable odor of burning electronics, so it was powered down and sent into a secure isolation facility (the shop).  After running off the battery for a few hours, the smell returned.  I took it apart and started a few days worth of testing the batteries (it seems I spend a lot of my spare time testing and reconditioning batteries).  To discharge these batteries, I ran my AC inverter and a 60W bulb.  I recharged them with my storage and AGM charger.  There will likely be a few cycles to 50% capacity and then recharging, in an effort to recondition them, but they look like old gell cell batteries whose internal resistance is getting too high.  I'll know better after a few more days.


I got an ad from Home Depot in today's email .  In itself, that's hardly unusual.  It was when I clicked on the sale link that it got a little surprising. 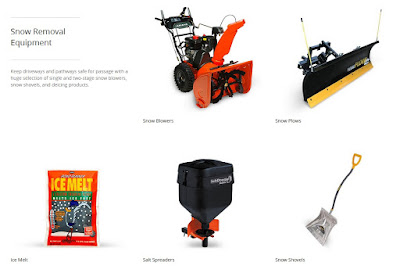 Huh.  I would have guessed that Home Depot would localize their ads to the cities or states where people register as living and not just send a national ad.  By coincidence, I was at the local HD store today and I didn't see a single snow shovel, show blower, salt spreader or bag of salt on display.

I'll take the chance I can extend my record of never needing one for a while longer.  Like the rest of my life.