Mr. Green is the name we've given to a new resident of the back porch. 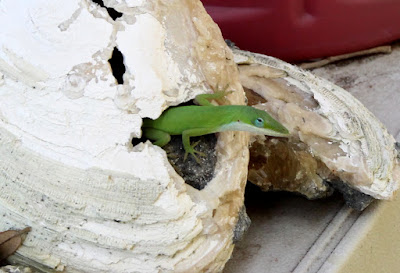 For all I know, this is Mrs. Green; they don't exactly have ways of conveying that information, so I'll use the sexist stereotype and use the masculine name.  Yeah, I know:  I'm a hater.  Further, we know there is a Mrs. Green.  We've seen them engaged in martial behaviors, if you get my drift.  I saw her hounding him to take out the garbage and throw out those tiny beer cans.

We first saw him back before Irma, and we encountered him several times while putting up and taking down shutters.

Why do I care?  When I grew up in Miami, green lizards like this were everywhere, and we called them chameleons.  I don't know if Mr. Green can change colors, but there doesn't appear to be any effort on his part to change color to match his home, a fossil clam geode from Ft. Drum, Florida (one of a small handful of places where collectible minerals can be found in Florida).  The chameleons I grew up around would get kind of reddish, brown, or bright green.  I remember seeing one jump onto a plaid chaise lounge chair by the swimming pool where I had a summer job, and watching the poor lizard get confused trying to change colors to match the plaid.  I think he died of a hernia.

No, I made that up.  The little green lizards disappeared when invasive Cuban Brown Anole (pronounced "a-no-lee") lizards spread into more ecosystems.  By the 1990s, the Brown Anoles were the most common vertebrate in Florida.  Until we spotted him in the yard, I hadn't seen a little green lizard like Mr. Green here in long time; probably since the 1970s.  What kind of lizard is it really?  I don't know.  I think he's a Green or Carolina Anole, but the pictures vary and I don't know what key identifying characteristics to look for.  As long as he eats bugs, he's welcome.