The website Physics-Astronomy.com after (I would assume) layers of editorial approval posted a story with the headline, Uranus Opens and Shuts on a Daily Basis.


Modeling the system around Uranus, they found that its magnetosphere occasionally opens up to allow solar wind through. This seemed to happen almost every day, about every 17 Earth hours.

This opening and closing happens around Earth, and it’s called magnetic reconnection – where the magnetic field lines of our magnetosphere and the solar wind align. This produces aurorae at its poles, and it’s likely doing the same at Uranus. But at Earth, this process is fairly irregular. At Uranus, it seems to be much more frequent.

OK, interesting enough, and the video at that magnetic reconnection link is pretty cool, but I could do without the juvenile and misleading headline.  It's not the planet that's opening and shutting, it's the planet's magnetic field.

The site is a bit prone to hyperbole and can't seem to let the juvenile Uranus jokes go by without playing. 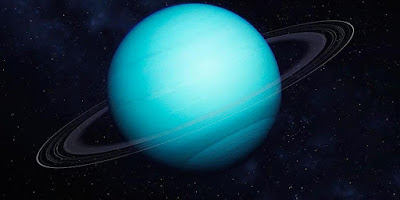 Artist's drawing of Uranus and the system.  I think the rings around Uranus are brighter than they'd appear if you were there to look.  Image from Physics-Astronomy.com.

And if you're dying for more Uranus jokes, the Internet's canonical joke list is probably here.