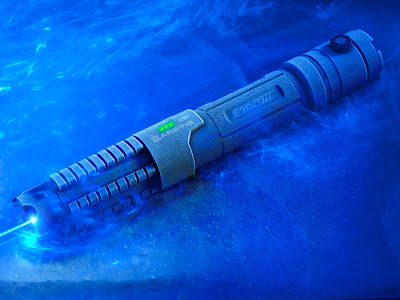 Daily Tech has this article about a laser from Wicked Lasers that is supposed to be powerful enough to burn things and people.  For a mere $200 bill.  I know people that would spend that much on dinner.  Their disclaimer/warning says


It will blind permanently and instantly and set fire quickly to skin and other body parts, use with extreme caution and only when using the included eye protection.

I have to admit my first reaction is serious Want!, but I think I'll let someone else be the beta testers.  I mean, what would I use it for?  A toy?  A really, really cool kitchen knife?

As weapon, it might have a good intimidation factor, but you will have to keep something in mind that you don't have to think of with your handgun.  With your gun, the firings are discrete; that is, when you send a bullet down range, it's a only one bullet at a time, moving through the air quickly.  Once it gets to something that stops it, the bullet stops and if you stop shooting, no one is endangered any more.  A moving target going through its path has to meet the bullet in both time and space.  The laser will be continuous.  You could have a clear path behind your intended target but while you're fighting, someone could walk into it.  I have no doubt you'd be liable for injuries to bystanders, as you are with a gun.

So while it's interesting, I don't see giving up my XDsc.
Posted by SiGraybeard at 9:07 PM