In fact, raising taxes is likely to destroy any hope of recovery and hurt us badly.  It's not Laffer's law, as is being widely reported (read this; there's great stuff here).  It's a consequence of Hauser's Law.

Hauser's Law is probably the least intuitive thing you will ever encounter in economics.  As a physical scientist, calling it a law makes me uncomfortable, so let's just say it's an observation that has not been disproved.

No matter what the tax rates have been, in postwar America tax revenues have remained at about 19.5% of GDP.

That is, when the maximum tax rate was 90%  as it was from 1950 until about 1963, the revenue as percent of GDP was close to 19.5%, and when tax rates were at their lowest, under 30% in the late 1980s, the revenue was essentially the same.  This illustration from the Peter G Peterson Foundation shows the effect: 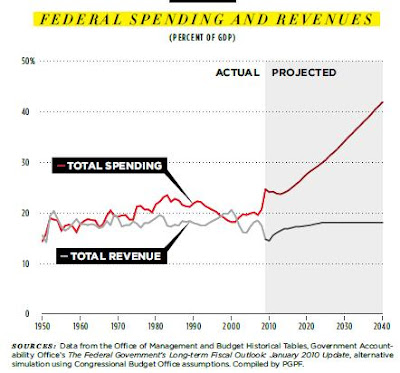 There's an in-depth article at a blog called Political Calculations here.  Let me give you a heuristic explanation (that's fancy talk for "seat of the pants") of how I see it working.  Let's say you're in the top tax bracket:

The difference between the two worlds is vivid.  The 35% tax world is a much more vibrant, growing, moving world to live in.

Empirically, we know this works; why is there even any question that keeping taxes low is the right thing to do?
Posted by SiGraybeard at 10:01 PM