It Has Been a Busy Week

And it's only Tuesday!

We had the Supremes vote that the 2nd Amendment is covered by the 14th, by a 5-4 vote, throwing aside complete gun bans.  On the one hand, it's good we won.  On the other, it's a 5-4 vote and wasn't a sweeping set aside of state laws.  The definition of "reasonable laws" will have to be won in their court, too, I bet.  It means we have four morons on the Supreme Court who can't tell cause from effect.  Chicago residents, your "leadership" is bound and determined to keep you helpless in the face of armed criminals, and willing to spend all of your money going back and forth to courts.  I wouldn't live there or even visit that place if you paid me.

We had Elena Kagan's hearings begin.  (Phlegm Fatale had the absolute best line on Kagan's appearance, "If Mike Meyers and Matthew Broderick had a love child...I mean that in the nicest way possible. Truly, I do") but we're too mature around here to make fun of  someone's looks.  Heh heh.  I thought she looked like Bob Costas after too much of a carbohydrate binge. 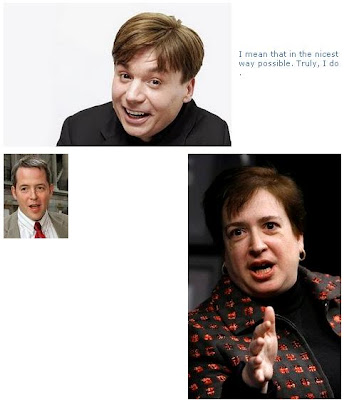 With political views like this, though, it's easy to find fault with qualifications:

Yeah.  She'll get confirmed.  And in a year we'll still have four morons on the Supreme Court; they just won't be the same four morons.

We had the death of Senator Robert C. Byrd at age 92.  The "Foghorn Leghorn" of the Senate, someone who was well known for their racial bigotry over the years.  While I might side with Billy Beck, Borepatch has the right tone. But he brought the bacon home to West Virginia and that gets you elected.  You'd be amazed at the things named after him.

A mere day after my posting on Sunday about the world's deepening economic troubles, the Royal Bank of Scotland warned their customers about monster inflation coming in the US, thereby adding to the number of major financial outlets trying to get their customers to prepare for the poop hitting the air moving device.  And Bloomberg News reports 46 states are on the verge of collapse.  Any doubt you'll pay for bailouts?

Still, I think the most important thing I've seen this week is from a new blog I read, New Zeal.  Watch this.  Consider how it goes with the blogging from Israel I reported on.  Consider what a small miscalculation from any of the (don't call me stupid) wise men involved could do.  If you're like me, you'll go stock up on beans, bullets and band aids.