BATFE Is At It Again

There's a joke poster I've seen at work that says, "I got one good nerve left, and you just got on it".  That's the BATFE.

If this isn't your first visit, you'll know I just built an AR-15 from an 80% lower.  This whole market exists because when you get a bunch of butthead lawyers together they have to decide where to draw lines, like the three reindeer law I talked about last night.  In the BATFE's case, what's a gun?  What specific part makes a gun into a gun?  Years ago, they decided the part that houses the trigger assembly, usually called the receiver, is the gun (Tam added in the first comment, "Usually.  Some notable exceptions would be the FAL and the various roller-locking HK long guns and their clones.").  If you own a typical pistol, like an XD, a Glock, a 1911, or whatever, you can buy a trigger, or a barrel or pretty much any piece in there as a replacement part, but you can't buy the lower receiver that houses all those "springs and things" without going to a Federal Firearms License holder.  If you have a lower receiver that's ready to have parts installed, even though none of those parts are there, it's a gun.  Clearly, if you had a huge steel plate, 2 inches thick, and had the correct machines and skill, it could be made into a gun, so they had to decide how much work was needed on a chunk of metal to make it usable as a gun.

For example, I got an advert from AR15.com for a ready-to-assemble lower.  If you buy this, you have to have it sent to an FFL, go through an NCIS check, and all that junk, the same as if you were buying a fully built, fully functioning AR-15 from Colt (or whomever).

but if you buy this one from Colfax Tactical, it's not a gun, and no FFL is required: 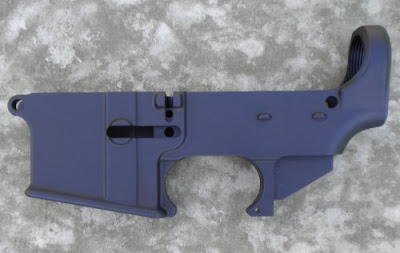 Enter KT Ordnance of Dillon, Montana (a lovely place - passed through there once).  KT sells parts that can go into a gun, and parts that can be made into a gun, like incomplete lowers, but they don't sell guns (as far as I can tell).  By coincidence, I had been looking for partial lowers for handguns as a follow on project to my AR, and found their 60% lower for a 1911 just this week.  According to David Codrea and Mike, from Sipsey Street, KT has just come under harassment by the BATFE for no apparent reason.  As David says at the Gun Rights Examiner,


Here’s the thing: IF Celata (edit: owner of KT) is doing what the government accuses him of, since when do they give out warnings and advise people to get a license?  Can you imagine the DEA finding you formulating and selling Oxycontin and responding by hand-delivering a letter telling you to stop and not resume activities until you become a legally-authorized pharmacist?

Remember, this the BATFE, the folks who seem like equal partners of the jack-booted Waffen SS, the agency where even the women stomp kittens to death if they don't find whatever imagined contraband they just raided you for.  Can you imagine them not raiding the place with fully automatic, 2-ounce-triggered M-16s raised if they really thought KT was doing something wrong?

No, they are clearly just harassing Mr. Celata.  Why?  Probably simply because they can.

Edit 10/22 1727 EST, to incorporate a correction from the comments where everyone can see it.  Not everyone reads them.
Posted by SiGraybeard at 2:42 PM