More About the Probulation Agency 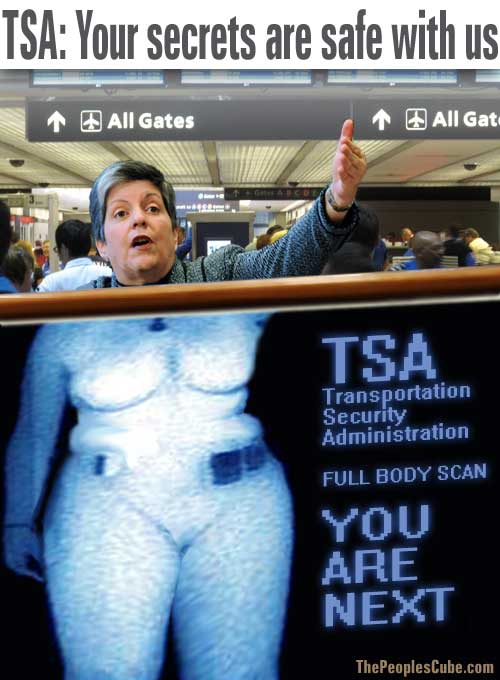 Both from the peerless PeoplesCube.com.
The problem with the TSA is not so much that in many folks' opinions they violate the 4th amendment prohibition from "unreasonable search", but that it's not going to be effective.  There are many reports of people who accidentally went through security with forbidden items and were never detected.  In their own audits of themselves, they fail far too often.  We need to adopt Israeli methods - use trained, intelligent people instead of grunts with million dollar machines.  (This article, while almost a year old, is a "must read".)  Don't tell me there's too much air traffic in the US to do what they do.  Being a big country means we have lots of resources, such as our spectacularly trained military.
The other day, I was listening to lawyer Peter Johnson, Jr., who is regular contributor on Fox News, talking with Sean Hannity on his radio show, as I was driving home flipping channels.  Johnson said, "when the plane blows up, if they find your body in one piece, it will be naked on the coroner's table, too".  I almost smacked my radio.  That's so wrong it's hard to find a starting place, but how about that it assumes the TSA will find 100% of bombs, and that there is no better way to find them than to essentially molest innocent citizens.  Both of those assumptions are wrong.
Popehat had this rather interesting take in the fantastically-entitled, "A Thought Experiment Regarding Genitals":


Imagine this:
A terrorist group — let’s call them, I don’t know, the Pervert Jihad — issues a videotaped threat.
Their demand: America must select 25 million of its citizens per year. Those citizens must give complete strangers working for the government a brief look at a blurry naked picture of themselves. In addition, the complete strangers working for the government must select 1 million of the citizens — men, women, and children of all ages — for “special treatment.” That “special treatment” involves the one million lucky citizens submitting to the strangers from the government briefly running their hands over the citizens’ clothed breasts and genitals, in public, in front of a crowd of annoyed strangers. The whole experience takes about an hour of the citizens’ time every time they have to put up with it.
The Pervert Jihad says that if America does not comply, they will kill Americans every year. They’ll kill, let’s say, about 450 — the capacity of a jumbo jet. We have reason to believe they may or may not succeed at this mass murder if they try.
Query:
Would we do it?

It's just a matter of time until something bad happens on a plane.   When that happens, instead of trying to find better ways to screen people instead of looking for devices, they'll come up with more invasive scans, and cavity searches will begin.  And, no, not the kind your dentist does.
Posted by SiGraybeard at 8:18 PM