A few thoughts prompted by this post from Brigid on hunting.

I have said before that I'm a fairly new member of the gun culture, only getting actively involved a bit short of two years ago.  I was never anti-gun, I just didn't own many.  A piece of the Bradys' stupidity lodged with me from time to time until I could shake out my head and think about what they were saying, but not being a regular shooter is different from being anti-gun.  I had a Remington Nylon 66 .22 rifle as a teenager, used to plink at cans and other junk from as far away as we could see, and that was it.  I just wasn't brought up in a hunting family, or with other strong involvement with guns.  My dad had an injury from WWII that prevented him from getting around well enough to go hunting, and eventually confined him to a wheelchair.  He had hunted as a young man before the war, but not after returning.  We fished as a family as I was growing up, before the wheelchair, and I spent a lot of my 20s and 30s fishing as my main outdoors activity.

The cathedral hush of the ocean at daybreak is as compelling a part of my life as the inland dawns Brigid describes, and hundreds of sunrises are burned into my mind.  From clear, hot skies with a purple sun breaking the horizon to cool, drizzly, sullen sunrises on an ocean fishing pier, where the sun isn't seen, certainly isn't felt, but just a brightening to the clouds.  The ocean at night, even in sight of the bright lights of land, takes on a different feeling than during the day.  The open ocean during the day is certainly a dangerous place, and you feel you're on the roof of an unseen world; but at night it takes on a different, almost ominous feeling.  A fish breaking the surface chasing bait while you sit in utter blackness gives you a gut-level understanding of the ancient fears of sea monsters.

Michael Blane blogged about results from a National Shooting Sports Federation survey that many of the newer shooters don't come from a hunting background, but from self-defense and concealed carry.  As such, the drive for maintaining hunting areas is not as strong as it was, but more people are interested in public ranges.  There is talk about finding ways to split the Pittman-Robertson funds collected on ammunition between hunting land preservation and developing places where concealed carriers can practice.

The problem is that anti-hunting regulations that choke off the lands are spreading.  Fewer hunters mean fewer voters putting pressure on the lawmakers to leave public lands open for hunters.  Coming from a fishing background, I know that freshly caught fish tastes nothing like processed, frozen fish that you'll get in the stores, and I'd like to try hunting, but I haven't got a clue on how to get started.  I can find ranches and other places that will be glad to give you an all-inclusive experience for around a thousand bucks, but not much else.  So I'd like to go turkey hunting, but without someone who knows the local areas to help me get started, I'm not sure how to start or even where to go.

To borrow an often overused saying (and a pun in this case), "it's a chicken and egg problem".  You need hunters to help train hunters, but fewer hunters means fewer trainers, which means fewer hunters... 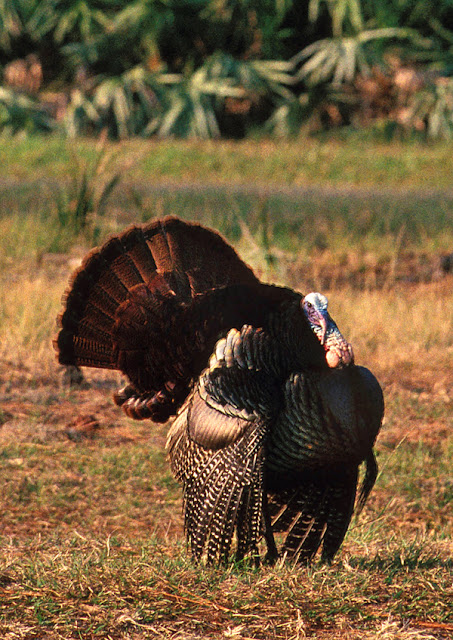 The Osceola turkey is a variety native to this part of Florida.

Finally, on this Thanksgiving 2010, I hope you all had a great day with family and feasting.  One of the things I am thankful for is that fine folks like you stop by here now and then.
Posted by SiGraybeard at 8:47 PM