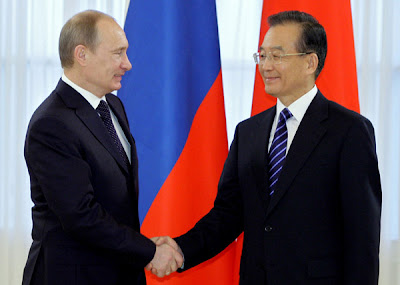 As I've previously reported, China has been getting rid of their dollars.  They are doing so in a prudent manner, so that their dollars don't become worth sheets of Charmin in their hands, but they are clearly doing so.  This is probably best seen as another step to the BRIC, the composite currency apparently on the way to replacing the dollar as the world's reserve currency.  BRIC is an abbreviation of Brazil Russia India China, the four nations whose currency will make up the BRIC.

In a related story, JP Morgan predicts the dollar will likely become the world's weakest currency as a result of the Federal Reserve Quantitative Easing programs.


“The U.S. has the world’s largest current-account deficit but keeps interest rates at virtually zero,” Sasaki said at a forum in Tokyo yesterday. “The dollar can’t avoid the status as the weakest currency.”

I've said this next thing before but it's a really important point, the kind of thing that news people should be saying.  It's blatantly obvious but I just don't see anyone else saying it, including some really good financial writers.   Our deficit this year was right around 1.4 Trillion dollars.  To do this without buying all of our own debt and going all Zimbabwe, we need to sell that much money in bonds.  The problem is that only the 9 largest economies in the world even have an annual GDP (all of the economic activity of that country for the entire year) as big as $1.4 Trillion.  According to the Wikipedia entry, in all three rankings they show, Spain is the first economy in the world that even has an annual GDP over 1.4 Trillion.  Clearly, they can't spend their entire nation's output buying our bonds.  That realistically limits our customers to the top 2, 3, or 4 GDPs.  Guess what: that's China, the European Union, and Japan.  If you read the news, you'll recognize that Japan is in a 20 year recession, the European Union is on the verge of financial collapse (Ireland just got a bailout, Spain is in trouble, Greece, Iceland, - the whole Euro zone is in deep trouble), while China looks like us in 2007: a stock market bubble and add in inflation they're catching from us.

In a nutshell, we need to sell more bonds than most of the world could possibly buy, and the economies that could buy them are almost guaranteed to be buying fewer (if any) of them.  That means we buy them, and that means really bad times are coming.

Things that can't go on won't go on.  Some time ago, Borepatch and I put our guesses forward on when the Euro collapses.  I said by now, and he said next year.  So far, he's got the lead track.  Trends predictor Gerald Celente said last year that by Christmas of 2012, the typical present for loved ones would be food.  It would look more like 1870s America than what we've known all our lives.

So as we go into Thanksgiving, be extra thankful for what you have.  Pray we have it next year, and that this isn't our last Thanksgiving as relatively well off, more-or-less free Americans.
Posted by SiGraybeard at 9:15 PM