Time To Say I Was Really Wrong

Back on August 25th, I predicted that by Thanksgiving, the DJIA would be down to 8000.  To quote exactly, I said:

Let me give a testable prediction.  Here's a plot of the DJIA since New Years of 2009.  (thanks to Wealth Daily).  That pattern forming on the right is a "head and shoulders" pattern, and we are just now going over the peak of the right shoulder.  That means a fall to the downside typically equal to the difference between the top of the head at 11051 and the lows shown by the bottom green line.  This predicts that the DJIA will drop to 8000 or 8200, probably (this is the guess-y part) in 2-3 months.  Since most of the really bad market crashes have come in September or October, this could accelerate things a little and pull it to 1-2 months out.  I expect the DJIA to be in the 8000 range at Thanksgiving, for example. 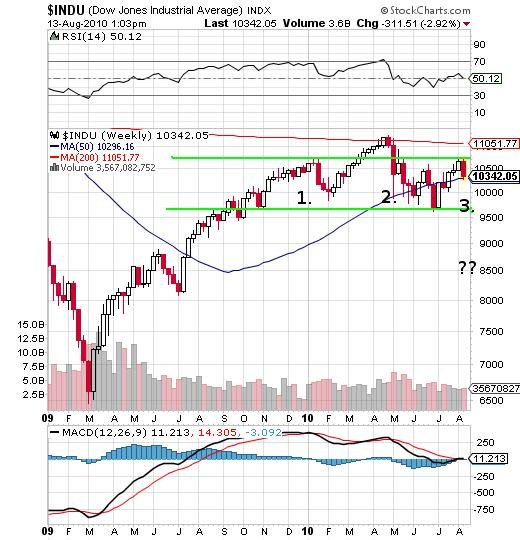 So what was my mistake?  I doubt that it matters much to you, but since the whole point for me is to learn more about the technical analysis side, it's worthwhile to see if there are lessons to be learned.

First off, the biggest thing I ignored is the effects of the hundreds of billions of dollars the Federal Reserve has pumped into the economy.  Money is like water, it will leak out somewhere, and some of it has affected the markets.  The banking industry, in particular, has benefited enormously from the cash influx.  For the first time in history, the Fed is paying interest on the money they give to banks - that's even better than a zero interest rate; they actually pay you to take their money.  Second, I paid a lot of attention to the charts posted by Clive Maund, the subject of a July posting of mine. These charts showed several indices with similar patterns developing.  And, of course, there was the Hindenberg Omen being talked about at the time.

The guys who do this for a living watch a lot more things than this!  I guess my biggest mistake was putting too much faith in these emerging head and shoulders patterns and not looking for things that might prove them wrong.  In getting out of the market when I did, I took about a 30% beating compared to where it is now.  Ouch.  I hope you didn't follow me.  On the other hand, I did get into silver at $5/oz (up over 5x) and gold at $320/oz (up over 4x).  That part of my retirement plans has kept me from being in trouble.

Is the threat of collapse over?  Oh, no.  With "The Ben Bernank" and QE2, the blossoming trade war with China (who holds virtually all of the cards), the EU arranging a bailout of Ireland, Spain on the ropes, the revolting French, and all, we are closer to collapse than I thought.  It's just that the market seems to be in a world of its own sometime.  More to come on that whole global economic collapse thingy in the future.