Do We Need To Abandon Google?

I'm hoping that a few of my fellow blogspot (small "L") libertarian, 2A friendly bloggers see this.

Is it time to abandon Google and Blogger/Blogspot?  They have gotten too tightly involved in leftist causes.  I mentioned Wael Ghonim on Friday's posting, a Google exec who proudly claims to have been one of the forces behind the Egyptian revolt.  Today, we learned of Jared Cohen,


"... another Google guy, Jared Cohen,  Director of Google Ideas,  heads up the Alliance for Youth Movement (AYM), a group that teaches digital activists to foment for revolution.  AYM has connections to the April 6 group, which is at the forefront of the current protests in Egypt."

The AYM is now called Movements.org.  As documented by Associated Content (Yahoo) here, Cohen and Undersecretary of State Glassman are involved with a group called Howcast, because:


... the possibility of "unleashing something here that is going to come back to bite you." Adding also that "any one of these groups could suddenly decide to, you know, turn violent or something like that" and, "now you're getting involved in something here that you have zero control over".

Which sounds to me like "plausible deniability", or giving a little space between official channels and the rabble rousers, in case things get ugly.


"So now it was up to Howcast to organize this and get it ready to go live. Howcast has five co-founders, 4 are former Google employees. Amongst them is Jason Liebman, also a co-founder of AYM."

I could go on, but I won't.  There's lots of reading there.  We've known for some time that the two founders of Google were close to progressive causes and all these little acorns are falling close to the tree.  I recommend spending some quality time with some Associated Content linkery.  Here we find that, when it started to be reported that they were involved in the Mideast situations, the AYM (Movements.org) started purging their web pages and changing content.


However, there was a push to get quite a bit of information "updated". On the original page (now deleted) the schedule was a short video entitled "How to be an Effective Dissident" immediately followed by "Overcoming Adversity: A Case Study from Egypt".

So why exactly would they scrub their web pages if they're not putting things up there that they don't want to be seen by the wider audience they're getting?

Here we are: TSM, Borepatch, Mike, and many more (most of my reading list on the right bar), living on the servers of a group of people who seem entirely opposed to us.  Maybe we're being silly to look at the Fed.gov shaving off communications like a razor.  Maybe we should be looking at Google as the Big Brother who would do that.  Maybe we should pick up and go somewhere else.

Where?  My only issue with Wordpress is that I can't read it from work.  Live journal?  Ideas?  All suggestions appreciated.

We don't pay subscription fees for blogspot, but supporting these guys is starting to feel like a bad idea.

(How about a little "Burning Down the House" imagery?) 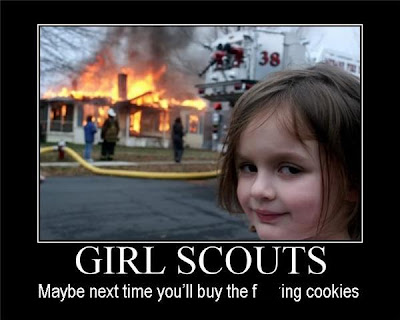