Now It Gets Interesting...

The Mubarek government has fallen and power taken by the military.  It is said that the military is a stabilizing force, and friend to the US - at least at the highest levels where they have the most experience with our military trainers.  It has been widely reported they are a very large recipient of our military aid in the region, and their elite forces have been trained by our elite forces.


Mohamed Hussein Tantawi, the head of the Higher Military Council that took control of Egypt on Friday after President Hosni Mubarak was swept from power, has spoken with U.S. Defense Secretary Robert Gates by phone five times since the crisis began, including as late as on Thursday evening.

Now it gets interesting.  This has been, as best I can tell, a true open source revolution - a group of groups fighting together with only one common interest, the removal of the regime.  The riots were not spontaneous.  Visitors a couple of months ago say it didn't seem to be a place on the brink of revolution.  These protests were organized by leftists such as Code Pink, The Muslim Brotherhood, and - very strangely - Google.  Srsly.


"Google executive Wael Ghonim, one of the principal organisers of the massive anti-Hosni Mubarak protests "

I suppose we could just lump Google in with the random leftists/statists involved; after all, they have been tight with Obama since the early days.  So we have leftists, trade unions, Islamists, and regular folks who just want the freedom to make a better life for their children.  Where does Mohammed El Baradei fit in all this?  Is he an Islamic radical or Islamic Socialist?  I'm not entirely sure, but I lean to "B".  Anti-western for sure, after the lies he propagated as head of the IAEA.  But before I leave the causes, don't overlook the effect of the inflation in food prices exported by Bernanke's QE2 and the administration's policies (or this policy).

So now what?  What do communist organizations have in common with fundamentalist Islam?  Remember the phrase "Godless commies"?  Communism places the state above all else.  Religion is the "opiate of the masses".  It just doesn't seem like they should get along.  Throw in conservative military like General Tantawi, and the mix gets interesting.

When does the next round of shooting begin?  Do you bet on the commies, or Muslim fundamentalists?  The questions come down to not only who is the nastiest, most ruthless fighters, but who has the most infrastructure in place, and the deepest "bench", to borrow the sports analogy.  If the killing gets really severe, who has the best second and third string?

In the best case, Egypt falls, the region shudders, then rights itself.  Yeah, right.  In the worst case, the Mideast regimes all collapse like dominoes.  If that happens, expect regional fighting that turns into a new Caliphate under the leadership of (potentially) Iran; possibly Saudi Arabia or the new Egypt, whatever that might be.  Expect it to spread.  In the last several months, Angela Merkel of Germany, Nicolas Sarkozy of France and the UK's David Cameron have all said that multi-culturalism has failed.  Multi-culturalism is Politically Correct speech for allowing Muslim immigrant communities to live as islands, with their own laws and not integrate into the culture of the community (Lodon or Dearbornistan). Expect this to mean that the Muslim communities in Western Europe will ignite in attempt to become part of the Caliphate.

And I have to admit I need to smoke some of what they've got going up on Wall Street.  We have the Suez Canal in the hands of, well, who knows whose hands it will be in by Monday?, protests going on in Jordan, Yemen, and Syria; protests planned for Algeria, Iran, Tunisia - did I miss someone? the IMF calling for a replacement for the dollar, and the stock market is up, the dollar is up, while oil, gold and silver are all down today. 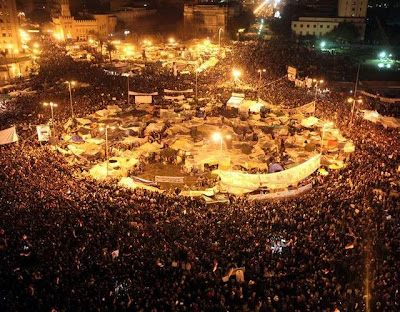 (source)  Peaceful now; it's halftime.
Posted by SiGraybeard at 9:42 PM