I got to spend a really nice Friday this week.  I took off the day and spent it with my older brother; just he and his wife, with my wife and I.  We live about 150 miles apart, so we're close enough to get together if it's important, but, somehow, it's rarely important enough to get together.   As we talked about what we were up to, how life was going and getting all caught up, I naturally talked about doing some shooting.  My brother seems to be where I was a few years ago; he's not anti-gun, just hasn't bothered to get one.  I believe that's where most of America is.

Why am I telling you this?  Kevin, over at The Smallest Minority has an excellent piece on Renormalizing the Gun Culture.  I consider this really important. Kevin says,

The criminal gun culture is self-explanatory. It exists everywhere, even (perhaps especially) where gun ownership by individuals is heavily restricted or forbidden. The genteel gun culture is the culture of what many of us term the Fudds, the people whose only interest in firearms is for hunting, for example,  or who only shoot sporting clays and see "no reason" for any type of firearm other than what they themselves own.  "Nobody needs" type X gun, as far as they're concerned."

Kevin then goes on to define the gonzo gun culture as


"The gonzo gun culture is the one that encompasses all other forms of shooting and collecting, from those of us who shoot IPSC and USPSA to those who spend literally thousands of dollars annually just feeding their Class III habit. We're the ones who shoot a lot, and like pretty much anything that goes "bang!" "

By this definition, I'm a full-up member of the gonzo gun culture. Michael Bane, whose TV series The Best Defense is the one gun-related show I record and watch every episode of, refers to people like us as Gun Culture 2.0.  I've never been hunting, I couldn't tell you the difference between sporting clays and skeet shooting - if there is one - and I wasn't raised shooting.  2.0 people come from the self defense side and get interested in shooting for fun.

Normalizing the idea that good guys carry guns seems extremely important.  I'm not looking for social acceptance - I couldn't care less what the elitists think of me - but society has been brainwashed by Hollyweird and the media into thinking the only gun culture is the criminal culture.  I think this is the underlying root cause of the tragic killing of Erik Scott last summer.  I can't imagine this would have happened if the "20-something security guard, who made a 911 call to police" wasn't freaked out over someone in the store having a gun.  It seems that in any real tragedies there's usually more than one thing that goes wrong, and if that account is right, Scott did make the mistake of staying in the store when the first employee told him he was not allowed to carry there; but the police made the mistake of shouting conflicting commands and then shooting an innocent man before he could mentally process what was happening to him.

Look, I know police work is stressful and I know it's split-second decision time.  The goal is not to be in that situation.  Maybe, just maybe, if crime isn't the first thought when someone is seen with a gun, Erik would be with us.  I'm sure there are others as well. 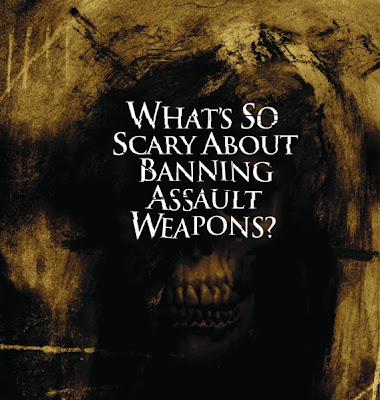 (image from our friends at the NRA, strangely enough)

If nothing else, the constant drum beat that the criminal gun culture is the only gun culture makes it easier to get other weapons bans, magazine bans and all the other fascistic crap the other side is pushing for.  So how do we normalize the idea that safe, sane people carry guns to protect themselves and their families?  Especially if we all don't have Oleg Volk's talent and ability to create eye-candy messages?
Posted by SiGraybeard at 8:06 PM