Today was fun show day here in the Silicon Swamp.  Since we've missed quite a few, we figured we'd go and see what called out to us.  The most noteworthy thing I picked up is something pretty ordinary.  A while ago I came to the conclusion that I might well be the only AR owner in this quadrant of the galaxy who hasn't tried Magpul Pmags.  Today, I ran into a vendor with a box selling them for $10 each so I grabbed a couple .

For the most part, the show seemed more like the shows from before the December 2012 insanity started.  ARs were plentiful and prices all were more like mid 2012; I saw several under $700.  Lots of handgun inventory, lots of shotguns.  I'm leaning toward picking up a semiautomatic shotgun, but haven't done enough research to decide on models or really what I'm looking for.

AmmoLand ran an interesting piece by Dean Weingartner last Sunday that I'm sure some of you saw: A Crash In Ammunition Prices is Coming.   His argument boils down to the manufacturers getting caught up on their backlogs:


In classic economic fashion, the bubble was fueled by actions of the Federal government.   Many federal agencies bought enormous quantities of ammunition.  While the quantities were only a small percentage of total production, the raw figures fueled conspiracy theories.  Obama administration actions fueled fear of coming shortages, gun bans, registration of ammunition sales, even potential low level warfare.  All of this led to the current bubble of ammunition sales.

In response, the economy reacted the way that free markets are supposed to work.   Ammunition suppliers started running their manufacturing plants day and night, adding additional shifts.   Importers scoured the world markets, trying to buy everything they could to satisfy the insatiable demand.   Foreign manufacturers bumped up their production to try to fill the desire for more and more ammunition.   Ammunition production was at the highest level ever for small arms, short of war.

Personally, I think it's our duty as patriots to have enough ammo on hand to cause Shannon Watts to lose bladder control (she of the constantly demanding mothers).  We were able to weather the bad shortage periods without cutting too deeply into our ammo supplies, but we also haven't been shooting as often.  That was really due to the many road trips visiting mom before she passed away last Thanksgiving, and the the work we've been doing for the new shop.  A "life happens" interruption, not concern over using ammo. 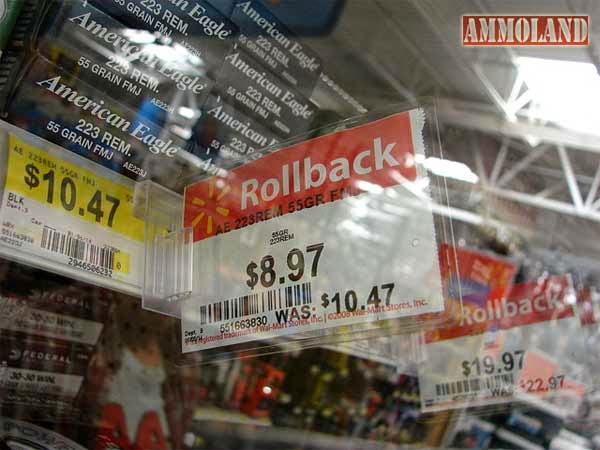 To enlarge a bit on what Weingarten says, a person with just a few rounds around the house, or used to stopping at the Walmart to pick up a couple of boxes on the way to the range, is justified in wanting a thousand or two, or a case of 5,000 “just in case”.  Once they have the 5,000, their desire for more drops in intensity.  If everyone had a few cases, the buffer in their supply might well prevent another bubble - or keep it from getting too bad.