I remember my first camera, a Kodak Brownie that took roll film (pretty sure it was this model).  As a 6 year old, it wasn't too hard to load roll film, but even black and white prints were a special thing and getting film not an everyday treat.  I think I still have Christmas pictures I took as a 6 year old.  I advanced through Instamatics with cartridges and flash cubes, finally getting my first SLR in the mid 70s: a Minolta SRT-101 (once I was a working dude).  I won't bore you with the complete history of my photography hobby from 35mm through the start of the digital age to now, which went through bouts of being semi-professional, I'll just say I've always had good quality cameras since that Minolta (which was stolen, but I still have its replacement).  This is to show where I'm coming from as a photographer: strictly old school.

The camera I count on the most these days is my Canon T3i, a DSLR introduced in 2011.  When I was doing 35mm and 120/220 roll (aka 2 1/4" film) I was an absolute bug for sharpness in photos.  "Tack sharp" is the photographer's buzz phrase and sharpness was my life.  Manual focus and manual exposure control only, baby.  I have a few lenses for my Canon: I never saw much sense in the popular idea of getting a DSLR and then a compromise lens and leaving it on the camera.  I always thought the whole idea was interchangeable lenses that got the best performance at the required focal length.

I've related the story that I ran across a great deal on a Nikon Coolpix S4000 when they were closing out the model and grabbed one.  I've tended to throw this in a pocket when headed to the range or out on the boat, always figuring it was much easier to live with trashing this little camera than the Canon and a lens, especially when my main lens cost about 3x what the Nikon did.  The problem is that coming from my background in 35mm and an obsession for sharp images, the Nikon image quality always disappointed me.  They'd look acceptable in small web images, or small sizes for posting here, but virtually every time I needed to go to 100% image size to look at something in detail, the detail just wasn't there.

Sometime around late March or early April, I decided I was going to replace the Nikon with something that gives higher quality.  Along the way of researching what was out there, I found out about the existence of waterproof, ruggedized, point and shoot cameras.  These are typically waterproof to 40 or 50 feet, freeze proof to 10F, and resistant to dropping or crushing.  With the main uses for this being outdoors, that just seemed like a natural.  The problem was that I didn't like the image quality enough to want to get one.  That's last year's review article, though, and I was kind of tempted by the Olympus TG-3, which had been announced in March, but there were no images.  If the TG-3 had better image quality (IQ) than the previous year's model, I'd get one.  Otherwise, well, I'll figure it out when I get there.

The first TG-3 images started coming out about two weeks ago, and DPReview put up its 2014 review last week.  Guess what?  The TG-3 IQ was not improved at all, that I can tell.  I'd fill this blog entry with pictures if I tried to show you what I don't like, but one writer used the term watercolor to describe the effect.  You know how watercolors look smeared and spread out, not crisp?  That's what the images look like at 100% to me.  The issue is noise, which all photographers of my age called grain because (in those days) it was individual grains of a silver salt in the film.  Modern digital sensors act very much like film, but are followed by custom ASICs that do noise reduction.  Exactly what algorithms are used and exactly how processed the image is are what I'm reacting to.  In my view (and many other folks') the Olympus images are over processed.  Yes, the noise reduction removes discrete grain or speckles, but replaces them with a muddied, low-resolution look.  I'd rather have the grain than the watercolor look.

Enough with keeping you in suspense.  I finally settled on a Ricoh WG-4 (manufacturer's website) DPReview reviewed the WG-4GPS, a camera with a GPS in it to tag your photos; I got the model without GPS.  But wait... Ricoh the photocopier company?  Last year, Ricoh entered into some sort of partnership with Pentax, one of the historically great camera companies.  Last year's model was the Pentax WG-3.  (To borrow a phrase from Dave Barry, Ricoh and Pentax checked into a motel room and merged repeatedly).  Although it's a bit of a tossup in my mind, DPReview said the WG-4 had the best image quality of the group.  If you're in the market, the Canon Powershot D30 also looked pretty good to me.

I went with the WG-4 for some other features and reasons aside from IQ.  Compared to the Canon, the WG-4 has a macro mode with built in LEDs around the lens for illuminating your subject.  The WG-4 has a faster lens (although lower zoom range) and does better video modes.  It's always a set of trades, but IQ is tops on my requirements.  If the camera doesn't have good images, I won't look at the other features. 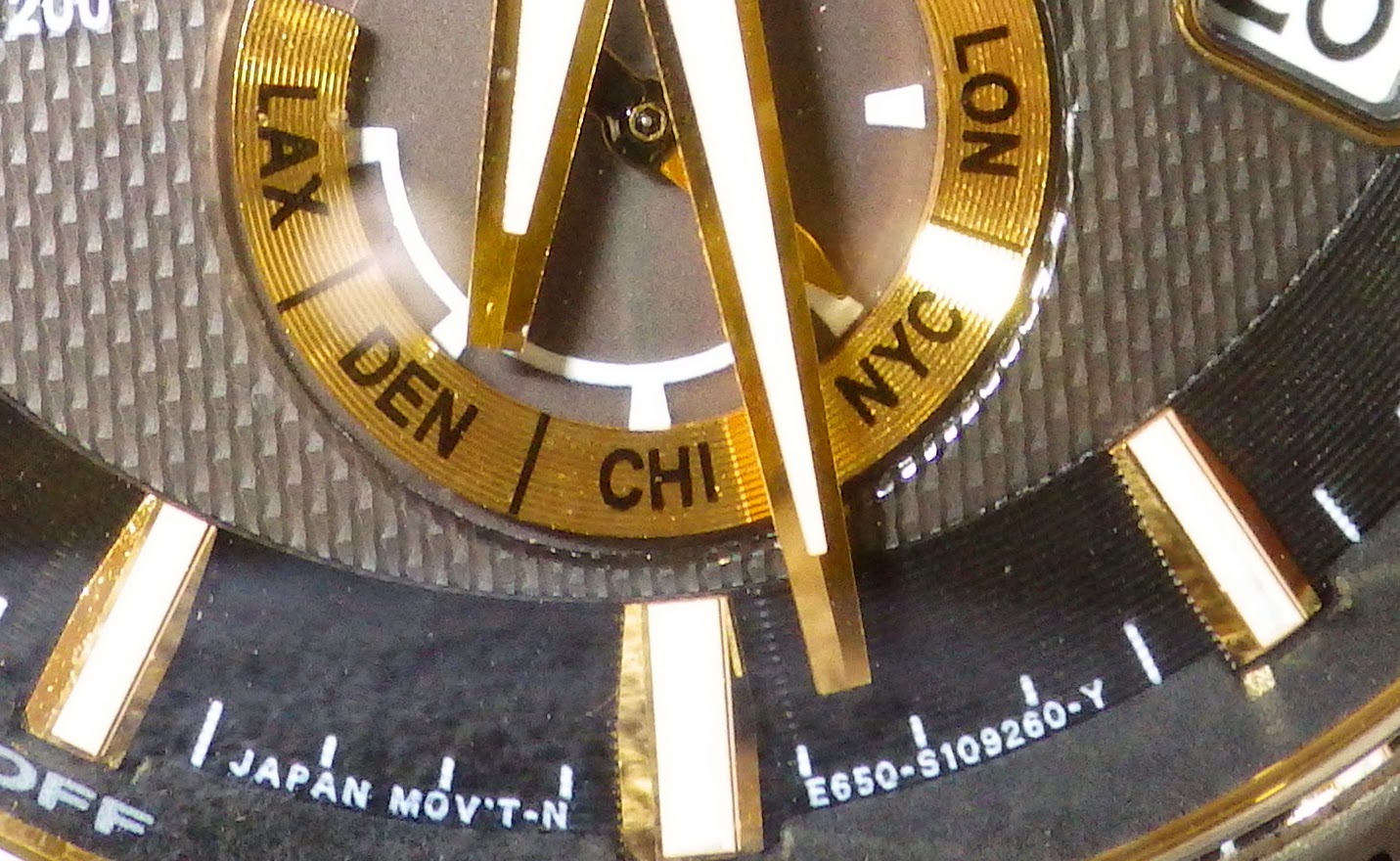 This is a cropped portion of a macro shot of my watch, taken out of a 100% size image.  No image manipulation except to crop it.  A reflection of one of those LEDs is visible between the abbreviations DEN and LAX (yeah, Denver and El Lay).  There's an area that looks kind or rough or fuzzy across the bottom: that's a reflection of the shirt I was wearing while I took the picture: I was wearing the watch while I took this.

After 25 test shots, I have to say I'm quite pleased with the IQ out of this camera.  I'm examining this photo at 100% (and more) and the IQ is all I'd ask for.  Yeah, it can be tough to distinguish lens aberrations from plain ol' out of focus from sensor noise reduction, but I think I can interpret what I'm seeing there.  I'm just learning my way around with it, but I think we'll get along just fine.

Oh.  If you're an old-school photographer pining for the old Kodak days, I stumbled across this site.  All I could manage was a Mr. Sulu-style, "oh... my...."