I'm Thinking It's Closer to Midnight

Those of us in a certain age bracket will recall the Bulletin of the Atomic Scientists, a magazine put out a by what always struck me as a peace-nik group.  It featured a clock in one corner of the cover, with hands designating some number of minutes before midnight.  Midnight was the apocalypse;  the atomic war everyone thought was inevitable back during the cold war. Over the life of the Bulletin it went back forth from as far as seven minutes to midnight to as close as two minutes. 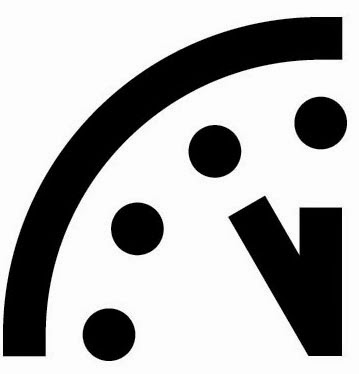 They're still at it and set the clock to 5 minutes to midnight this January.


“They say the world's biggest threat is the ‘potentially civilization-ending’ outsized nuclear stockpiles of the United States and Russia, along with the growing arsenals in India, Pakistan and China.”

The nuclear arsenals of rational civilizations don't particularly scare me, but if they're setting it to five minutes based on that, I suggest it needs to be pushed up to one or two minutes to midnight.  Not because of a nuclear war but an economic apocalypse that has just jumped up in possibility.  I'm talking about the effects on oil prices of a widespread civil war in the Mideast.

T. Boone Pickens said last week that if just Iraq's oil were to go off the market, we could looking at $200/barrel oil.  That number has been echoed by other analysts.  The west simply couldn't survive that shock - the economies are too fragile right now.  With $105/barrel oil, regular gas averaged $3.66 this week.  For a rough guess of the effects of $200 oil just double that to $7.32.  That would increase the price of everything, and start a spiral into drastic economic slowdown and then collapse.

Is that going to happen?  Are you a betting person?  ISIS, the group behind the war in Iraq, isn't shy about declaring they want a caliphate.  Do a Bing News search on Caliphate and you'll find some analyst saying "Not Gonna Happen"  and an administration (DHS) droid saying "The Return of the Caliphate is 'inevitable'".  The thing is, I don't think the establishment of a caliphate is a necessary part of this picture.  The essence is a re-heating of the perpetual Sunni-Shia conflict into an open civil war that takes out oil fields.  While each individual group may want to control the oil fields to fund themselves, the other side will be more than happy to destroy those fields to help destroy their enemies.  So what happens to the price of oil if Iran takes out Saudi Arabia's oil fields?  What if the entire region becomes embroiled in a widespread war?  If one country puts it to $200, where does it go if multiple countries go down?

Might I suggest that it's higher priority than usual to make sure you're ready to put your apocalypse plans into place at a moment's notice?  Check your water and your food, gas up your cars, verify all your comm links and anything else?  There may only be a matter of hours of notice that it's going all tango uniform.