Along with the big supreme court decisions this week that predominantly came down on the side of the constitution (remarkably, by 9-0 decisions), the court ruled that a company called Aereo was violating the 1976 Copyright act originally aimed at the (then) new cable TV industry. The idea is that they are essentially taking broadcast signals and rebroadcasting them without the owners' permissions.

Loosing my techno-geek equivalent of a man-card, I admit I hadn't heard of them, so when the reporters explained how the service worked, I was all ears.  My simple version of their case is this: imagine you have TV antenna at the end of a piece of cable on the side of your house.  Now what if that cable was really long, like you needed to put the antenna in another yard; or another city.  Now if you make that cable too long, you need to amplify the signal to make up for loss in the cable, so what if you encoded that and stuck it over the internet?  Their argument was that they leased each customer an antenna that received any channel they wanted, ran it to a Digital Video Recorder, and then sent the video to the customer over the internet.

All this sounds technically feasible, and on a scale of 1 to 10 in interest (10 being most interesting) about a 2.  Then the reporter flashed this picture of the Aereo antennas that are leased and I mumbled loudly enough for Mrs. Graybeard to hear, "but that's impossible.  It can't possibly work the way they're claiming". 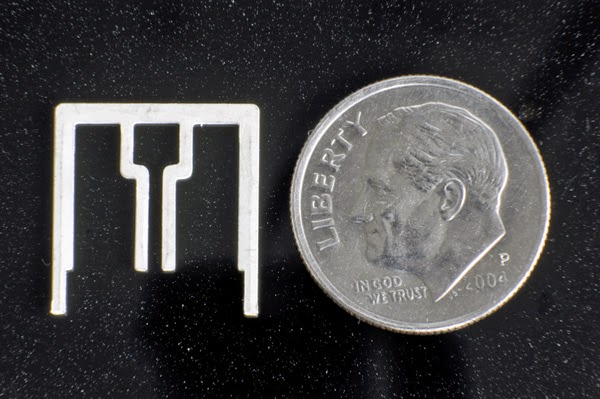 Here's why: antennas are at their most efficient when they're resonant, and they're resonant where their length approaches multiples of one quarter wavelength of the frequency they're tuned to.  This antenna is too small to be an effective antenna for broadcast TV.

Broadcast TV signals, like all radio waves, have a wavelength inversely proportional to the frequency they operate on, so that frequency times wavelength is always the speed of light.  Commonly written as c = f * l.  If you measure c in meters/second, which is the most common unit, c is a nice round number: 300,000,000 (three hundred million) meters/second.  With frequencies in MHz, just divide 300 by the frequency to get the wavelength.  It's easy to see that the wavelength of the UHF TV channel 35 at 600 MHz would be 300/600 or 1/2 of a meter (19.8 inches).  A quarter wave 600 MHz antenna would be 4.92" long.  It's not to say that the antenna wouldn't receive other signals at all, just that they wouldn't be received as well.  As the channel moves farther away (either direction) from 600 MHz, the received signal would become weaker.  The frequencies that carry over the air HDTV signals run from below 100 MHz, nearly 20' in wavelength, up to 800 MHz, 14.76".  This antenna (a dime is 0.7" in diameter) is simply too small to effectively capture over the air signals.  It can't work.

I can hear the folks who want the service saying, "but Aereo says they use massive arrays of antennas; that has to make it work, right?".  Actually, no.  Antenna arrays are arrays of tuned elements, each one of which is a quarter wavelength, connected in only a small number of ways and effective only at very specific things.  Can it just work if they're all connected end to end and make a lot more metal?  You can connect them and make them longer, but that won't work for all frequencies either.   Yes, putting lots of independent loops in close proximity can make the antennas interact with each other, but this is more likely to be a bad thing than a good one.  (BTDTGTTS) Making broadband antennas isn't a trivial thing, and unique designs are few and far between.  You don't just throw loops of metal together and have it work worth a damn.

Antennas are extremely well studied, and they are so tightly bound by electromagnetics that truly new innovations are extremely, mind-numbingly rare.  Antenna patents are for new applications of old ideas (I have one), and tweaks to existing designs.  Think of it this way: if you could make an antenna the size of a dime work at VHF, one the size of a dinner plate would work for broadcast radio, so why would broadcast stations buy all the real estate they do to put up giant towers?  (My frequent advice to newbies: I don't care who you think is the toughest or strictest teacher you've ever had, Maxwell is a cast iron bitch compared to the worst you've ever had).

I'm not commenting on the law or the ruling at all.  I don't watch broadcast TV, so I don't have a horse in this race.  It simply doesn't matter to me personally or professionally (much like the LightSquared fiasco I wrote about back in '12), but I do call bullshit on the argument they're making.  If they're claiming they lease an antenna to users and get everything off the air, they're not doing what they say they are.  Maybe somebody told the court it can't work.

Also note that as I was thinking these things through and getting ready to write this, Mrs. Graybeard found this article on HDTVExpert.com which takes the same approach to the problem that I do - probably because we're both radio engineers and hams.