As hard as it may be to call myself an athlete in any sense, I recognize that for an old dude I am.  Or rather, was and that's the essence of ex-athlete's syndrome.  Because I'm a lazy typist, I'll call that EAS.

In a nutshell, EAS is the result of too good memory.  You did some activity for so long at some level, even if moderate, that you think you can always do it.  My thing was cycling.  For almost 20 years, from around 1990 until a few years ago, Mrs. Graybeard and I rode a lot.  Our typical week was 12 miles every night after work, typically four nights a week, and long rides on the weekend.  Our shortest weekend rides were 20 miles.  Many weekends, we'd take off for the day (usually on Saturday) and ride most of the day.  Favorite rides were 50 miles up to 80 miles.  We've ridden centuries (100 miles) many times, and my personal longest ride was most of the 170 mile cross-Florida.  We never rode terribly fast and stopped often for drinks or food or just to get out of the blazing Florida sun, but I didn't know a single 50-something couple that was doing what we were doing.

A few years ago, slightly before I started this blog in February of '10, we essentially just stopped.  There's a handful of reasons, but in my mind we were always just taking off for a little while.   The longest we had been off the bikes before then was about four months, after being hit by a truck.  I was extremely lucky; I was let out of the ER about 4 hours later with admonition to see an orthopedic guy about a broken vertebra in my back.  It wasn't a picnic; I was out of work for weeks and had a broken tailbone that hurt for about 9 months, but I walked out of the ER mere hours after being hit by a pickup truck.  Mrs. Graybeard didn't get off even that easily and underwent extensive (incredible) surgery to repair her back.  They installed rods to support the area, and rebuilt the crushed body of a vertebra with a cadaver thigh bone.  She was in a hospital a week and rehab facility for another three weeks.

Still, after four months, we were ready to ride again, and it didn't take terribly long to get back to long rides at the same sort of pace.  In my mind, all of this added up to somehow thinking the fitness and muscle tone I had was so ... permanent ... that it would never go away.  I can always do it.

I've been been pressed for time lately and not writing as much.  This is one of the reasons.  Because I miss the fitness to be able to do things like build the shop furniture, or lie down to work under the console on the boat, or a dozen other things, without suffering for days afterward, I've started to try to get that back.  Unfortunately, I need to do physical therapy-style exercises for some old injuries and the weight work is slow, but the stretching and bending is fairly effortless and I've even been riding.  I have an indoor trainer I can put my bike on and ride against resistance indoors.  (Current version - much newer and a bit slicker than mine.  Not to mention about twice what I recall paying.)  Yeah, I'm riding indoors instead of on the road.  Why?  Actually to play head games with myself.  If I'm outside, I'm always going to want to press it a bit more and go farther.  Riding on the trainer is much less enjoyable and I tend to just watch the timer and when it's done, I'm off that bike.  I'm making myself stick to a program. 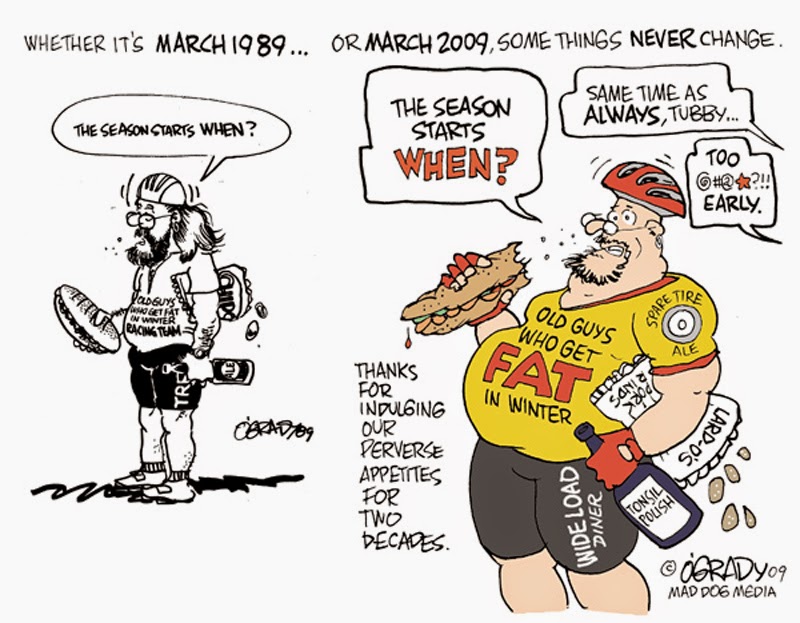 If you're not a cyclist, you've never seen O'Grady's cartoons and the "Old Guys Who Get FAT in Winter" theme...  Maybe you have to be a sick cyclist to appreciate these.