There's a saying that demographics is destiny; you may encounter it during discussions of declining western birth rates vs. the birth rates in the third world.  It's widespread problem, with declining birth rates and increasing cost of social programs throughout the US, the European Union, Japan and Russia.  That has led to wholesale importation of immigrants from the Muslim world into Europe, with the problems, some horrific, that have followed.  Ask Ayaan Hirsi Ali about some of those.  I have to believe it's possible that demographics are a major factor in Angela Merkel's rush to accept all the "refugees" coming into Germany; she needs new workers to pay for everything Germany is funding.

But that's not where I'm going.  The other day, I had a strange thought: why do we say there was a baby boom after WWII that we consider an abnormal population surge?  The whole idea that there would be an abnormally high population bubble after WWII doesn't make sense to me.  I mean, sure there were guys who were at war, came home to their wives and had children.  I get that.  No problem.  But that's not an abnormally large rate, that's a delayed rate.   If there had been no WWII, those families would have still had those children, but probably one to five years sooner.   And don't forget, almost half a million of that generation didn't have children because they were killed in the war and those children that were never born would have made the total population larger.

So I started looking into the birth rates and population of the US and what I found surprised me.  This the birth rate as number of children per 1000 population.  It's from the Wikipedia article on the WWII baby boom. 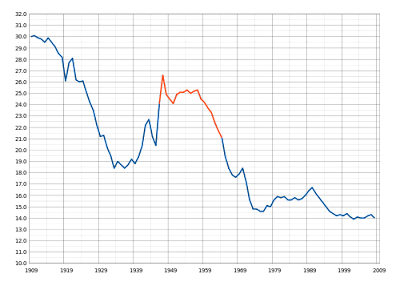 The red curve marks the area called the WWII baby boom.  In my heuristic (fancy word for seat of the pants) look at this, I see a crash in birth rates during the "roaring twenties" leading to an even lower rate during the Depression.  The first one seems strange.  It's my impression that during good times, people tend to feel more optimistic and have more children, while the rate tends to go down in economic down times.  So why was the birth rate declining through most of the 1920s?  If you pretend WWII hadn't happened, in order to figure out what the curve would look like if people had just kept on with their lives, my guess would be the peak from 1949 would shift to the left (earlier) and perhaps down (lower).  But what jumps out at me from this graph is how much lower that number is than the rate in 1909.  The 1909 birth rate was far higher than even the highest years of the post WWII boom.

The only thing that makes the boom look large now is the drop from a birth rate of near 22/k or so to the mid 70s birth rate of 16/k or fewer, a change most likely brought on by the introduction of "the pill" in 1960.  I think the post WWII baby boom is a demographic illusion.  To the people of the time, it seemed like it was high birth rate because it was higher than during the Great Depression while actually still being well short of their parents' or grandparents' generation.  From a more recent perspective the post war birth rate seems really high because it's compared to the much lower birth rate brought on by the introduction of the pill.  Of course, we need to add in the effects of vasectomies for contraception, as well.

Stated another way, the only reason we have a bubble of baby boomers heading toward retirement is that the children who could have been in succeeding generations were either prevented or, later, aborted.  Just looking at numbers.  I believe the US birth rate is currently still below replacement levels (20 on this chart).  Like Europe, we're attempting to get around that by immigration.  Like Europe, I expect trouble coming because of that.