Putting Robots Out of Work

The concept that robots, or "computers" would replace all of the workers in companies is actually older than the word "robot".  The name was first used in the 1920 play "Rossum's Universal Robots", or R.U.R, by the Czech author Karel Capek, but before that the idea of automata as some some sort of servant or slave goes back to early societies before Christ.

Despite the optimistic writings of Isaac Asimov and others, robots have not developed intelligence, even with the advance of Moore's Law and increases in computer power.  No robot has developed sentience, yet.  (If they have, they're keeping quiet about it - which is a pretty darned good sign of sentience!)

Trade magazine New Equipment Digest reports on a robotics trade show recently held in Milan, Italy, and the emerging direction of creating man/robot teams, where each does what they're good at.  Something I find interesting about this is that it appears to be the result of our old friend, The Law of Unintended Consequences.  See, robots are strong and good at doing a lot of repetitive tasks, but because they aren't sentient, they're a workplace hazard.  A robot going through its programmed motions doesn't recognize people as things apart from what it normally works on, and will hit or knock over people while going through its motions.  The first couple of people to be killed by robots were killed in just this way.  The story of Robert Williams, the first (known) person killed by a robot just doesn't have any details, other than it being on a Ford assembly line.  The better known second victim, Kenji Urada, was documented better.  He died on an assembly line at Kawasaki Heavy Industries, when the robot arm he was working on and hadn't properly made safe pushed him into an industrial grinding machine (gruesome, I'm sure).

Workplace safety has pushed robots into areas where humans don't go.  Factories will have fenced off areas that are No Go zones until the robots are turned off.  Enter the more nimble, smaller, less powerful robots on display. 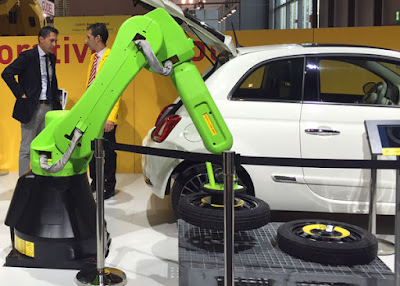 
This one is a normal, high capacity, yellow Fanuc covered in a soft green foam and equipped with safety stop protections in case of collision.

Basically, rather than starting from scratch to create a new kind of robot to compete in the collaborative race, Fanuc simply made its own proven technology collaborative. Which is pretty clever.

As a result, the company has a sturdy-yet-safe robot with a massive 77 lb payload (compared to the 10-25 lb usually found in the collaborative market).

The author at New Equipment Digest takes the CR-35iA for a spin, finds it incredibly intuitive to learn, easy to control, and learns the operator controls he's using aren't going to be out for a while, but offer a big advantage:


Using the controller, which won't be out until next year, assemblers can grab heavy components like seats and tires with the CR, and place them wherever they go without breaking their backs in the process. Sort of like an external bionic arm.

Even better, he told me that the only way to do this in a factory today is with normal high-powered robots, which means all of the necessary safety cages and precise engineering that they require.

The CR-35iA, however, allows workers to do this job themselves, skipping the process gap between placement and installation, which could help speed up assembly by a few seconds.

That's right. This robot isn't putting humans out of work, it's putting robots out of work.

A common theme in design is that the last 10% of the work takes 90% of the effort.  I can design you a radio for any service that will work pretty good, and get it to you pretty darned quick.  It's when you start adding new requirements or ones that conflict with others that it gets harder.  Similarly, getting robots to do every last detail in a long string of complex assembly operations may push the costs into prohibitive realms, but having a robot that's easier to work with, doesn't require as much programming, and doesn't need restrictive safety areas around it, could be just the ticket.

I've commented here before that I've spent 40 years working in the electronics manufacturing industry in this country and one of the only things that has remained constant is people telling me the electronics manufacturing industry is leaving America.  That goes for just about every industry, from companies that manufacture electronics components to car parts to bicycles.  The US has a very strong manufacturing sector.  It's also true, though, that more automation has displaced workers.  The other term for that is "increasing productivity" which is an imperative.  It appears from this NED article that the robotics industry is increasingly looking not to replace workers, but allow them to be more productive by augmenting them.