A friend at work sent me this link to a story about a guy who built his own railgun.  Railguns are popular research topics for the military, and use electric energy to accelerate the projectile.  Here, the builder used six large, 350V, 5500uF capacitors (in blue), which weigh 20lbs combined and can deliver 1800 Joules of energy to the projectile.  The gun is powered by a 12V lithium-polymer battery that’s stepped up to 1050V using a micro-inverter and a transformer before charging those capacitors. 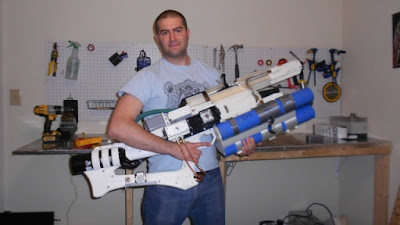 Despite the fact that it doesn't appear to be painted or finished, it looks a lot like a gun from the first Men in Black movie.   The article is short on details, but says


The aluminum sabot flies out of the gun at 250 meters per second (559 mph), hits a plywood target with a steel backing approximately three feet away, and bounces off the wood after leaving a 1/2-inch deep indent

It doesn't say how much that sabot weighed, but we can look at what little information we have.  To begin with, 250 meters per second converts to 820 feet per second.  That's around the muzzle velocity of a 45 ACP handgun.  Obviously the impact energy depends on the mass being thrown, which they don't tell you.  A 12 ga. slug goes about 1600 fps and imparts almost 2600 ft-lbs at 25 yards (both of these courtesy of the Federal Premium online calculator)  That slug weighs about 1 1/4 ounce.  That 45 ACP round at 820 fps is going to be weigh a bit under 1/2 (42%) what the 12 ga. slug weighs and deliver a bit over 1/8 (14%) of the energy.

Dean Weingarten at AmmoLand reports he was able to find the mass of the railgun's sabot.  It's tiny.  Far, far less than the 230 grain FMJ I looked at on the ballistics calculator.


I was able to find the mass of the projectile with some Internet research.
...
The projectile mass was 1.1 grams, about 16.97 grains, so the total energy would be about 25 foot pounds.  That is about the same as the most powerful common air rifles, for the minimum velocity listed.  [Emphasis added - SiG]


A powerful .22 caliber air rifle such as a Benjamin Discovery or Marauder fires a 14.3 grain pellet with a muzzle velocity of approximately 900 ft/sec. ... about 26 ft lbs.

Weingarten points out that this railgun is only operating at 1.6% efficiency in converting the electrical energy into forward movement, a big issue in railgun development.

Considering that this expensive, over 20 pound, rifle doesn't outperform a common .22LR out of a rifle, I'd say railguns have quite a way to go before they're practical.  I don't want to discourage the guy; the gun has an epic coolness factor, and as far as making a usable firearm goes, he's got to start somewhere!

This is post #1900 here, and may well have to stay alone a few days.   I expect to be unavailable tomorrow and Thursday.  Y'all have fun!