Yesterday, we went to see The Martian at the local multi-cinema.  I was going to write some mini-review thoughts down, but it all pales next to Adaptive Curmudgeon's take on the movie:  "For Once, a Movie Didn't Suck".

Sure it's a movie.  They got the science more right than not, but some times they just had to exaggerate things for dramatic effect.  Several people have commented that the atmosphere on Mars is so thin that a storm of the force required to throw a fully grown man just isn't happening.  But they needed the plot device to separate Matt Damon's character Mark Watney from the rest of the crew and provide a plausible reason for the mission to leave him.  From the IMDB trivia page:


The atmospheric pressure on the Martian surface averages 600 Pa (0.087 psi), about 0.6% of Earth's mean sea level pressure of 100 kPa (14.69 psi). It is so low that a "fierce storm", as they put it, would be something akin to a very light breeze messing up your hair. Author Andy Weir admitted this was his biggest inaccuracy in the story...

...and the technically weakest part of the whole film.   They speed through the delay in conversations, after saying light time to Mars was 24 minutes, but that has to be done.  In one or two scenes, the people waiting on earth were in different positions or moved to reflect the long wait between sending and receiving messages.  But that's all minor.  Go. See.  It. 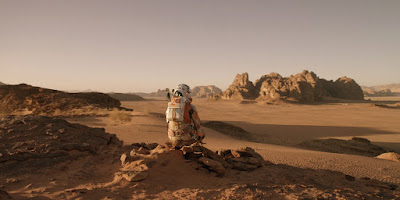 At one point, Watney talks about the simple fact that everything he does and everyplace he goes he's "The First Human Ever".  It's not dwelled on, but it does help you think about what it would be like, marooned in an extremely hostile environment for two years.