A recent US patent granted to the European giant Airbus makes enormous strides in the never ending struggle to make airline travel more miserable.  Stacked vertical seating. (Hat tip to a place called Quartz - sent to me in the home email today)

Seriously.  People sitting above something similar to the existing seats.  I am not making this up.

I'm a kinda big guy.  Not NFL lineman big, but over average.  6' tall and on the plus side of 250.  Pretty much wear XXL in everything.  I find the current seats too small and too uncomfortable.  I especially find the distance between my knees and the seat in front of me too short, like about an inch closer than the length of my thighs.  The sample layouts in that patent will not work for me.  Take a look at this illustration from the patent: 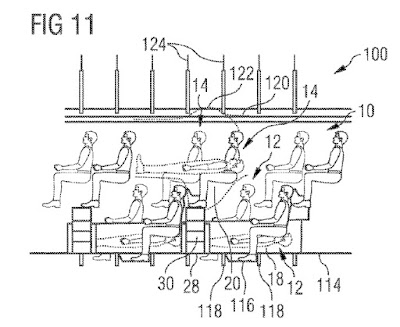 Note there's three layers there.  Not just the main seats, with secondary seats over their heads, but literally a layer of people lying at floor level.  All of those people depicted don't show the full extent of the seats/beds, but the stated goal is to take better advantage of vertical space in the aircraft.  The smaller, single aisle aircraft like their A320 series sure doesn't have enough vertical space to accommodate this, unless the overhead compartments are taken out - and I'm not sure that would go over well.  People seem to put everything up there, stopping just short of full-sized furniture.  Usually.  Perhaps this will only be for larger aircraft. 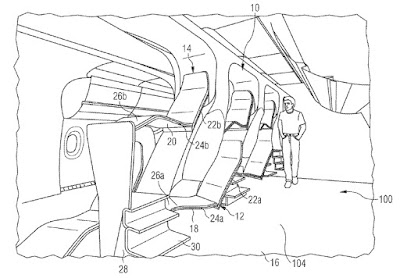 Actually, I think even this misses the mark.  Think Japanese capsule hotels, those places where you rent a small tube to sleep in, and use communal bathrooms, and baths.  I think that would fit even more people onto the airplane.  I can envision an arrangement of tubes that would look like a battery pack, only instead of AA batteries, you'd slide in there.  Sort of like an array of MRI tubes ... only less friendly.

I used to love flying around the country.  Getting onto a plane for a cross-country vacation was about as nice an experience as I had.  Relaxing, looking out the window at the passing beauty.  Then came more and more crowding, endless lines and the TSA grope-o-matic.  This is yet another reason to drive.  And adds more meaning to the phrase, "If it ain't Boeing, I ain't going".