The first thing to note is that when oil had been around $100 for a while, everyone thought the days of sub-80 or $90 oil were long gone and they'd never be seen again.  Today, you'll read pundits saying that oil will stay below $60 and we'll never see $100 oil again.  That epic shortsightedness is lesson #1.

Last December, I ruminated a bit on the price of oil and what may be going on.  This weekend, I see a summary by Jim Rickards that makes it appear I was right all along.  I wrote:


I think there can be a bigger game going on here, though.  The principal power in OPEC is the Saudis.  The Saudis have no use for the Iranians and are frankly terrified of a nuclear Iran.  You can bet your butt that if Iran goes nuclear, the Saudis will go nuclear as well.  For a country that nominally hates Israel, they've quietly agreed to allow Israel to over fly Saudi territory if needed to attack Iran ("the enemy of my enemy is my friend" in action?).  They also want Assad out of Syria and Russia is propping up both Iran and Syria.  I think it's entirely possible that Saudi Arabia could be playing the game to get Putin out of the area, and try to collapse the governments of both Iran and Syria.  Russia's economy is already showing signs of trouble.  If they collapse Putin himself, get him ousted by ballot, by revolt or worse, I think the Kingdom would view that as a good thing.  I also can't imagine the Saudis would be too upset if they found a price for oil that shut down American shale oil production.


I included this handy graph of the price to balance the national budgets of several oil producers.

A vitally important piece of information which was missing from this chart was the cost per barrel of fracked oil.  What does it cost to produce a barrel in the American and Canadian oil fields?  The fracking industry assumed oil would remain in a range of $70 to $130 per barrel and based their business model on this. Over $5 trillion was spent on exploration and development, much of it in fields like the Bakken formation and the Colorado/Wyoming Niobrara oil shale.

As I said last December, OPEC, and particularly Saudi Arabia, found themselves in a tight situation: not making enough profit from their sales to be fully comfortable.  Note I said enough profit.  Saudi Arabia is unique in actually being able to produce oil at a profit for as little as $10/bbl!  One thing was abundantly clear, though, unless they did something to strike back at the American production, they were condemned to low oil prices for the foreseeable future.  As Rickards says, the Saudis could survive with oil at $30, but it would be hell on their budget.  $80 would be good for their budget, but would probably allow the American frackers enough breathing room to stay alive.  Instead, they went for a price comfortably below that $70/bbl price they believed was the price of American oil.


It turned out that the optimal solution for the Saudi problem was $60 per barrel. A price in the range of $50 to $60 per barrel would suit the Saudis just fine. That was a price range that would eliminate frackers over time but would not unduly strain Saudi finances

Oil at $60 has the added bonus of hurting both Russia and Iran, as well America.  It's win-win-win for the Saudis.  If you look at the records of the past year, the price of oil hit the Saudi target price of $60 per barrel by the end of 2014. But it kept going down. The price hit $45 per barrel in January 2015 and $40 per barrel by this past summer. That was due to normal market overshooting and momentum trading. It was also due to the fact that desperate frackers actually increased production to meet the interest payments on their debt even thought they were in the process of going broke.

Assuming war doesn't break out in the Persian Gulf region, I can see oil staying in the ~$45 to $60 range for a while; specifically, until the American fields are largely shut down and the workers moved back out of North Dakota and other places.  It will stay there until it will take a couple of years for the US industry to get fully mobilized again.  For planning purposes, figure some time in 2017.

If you have enough Ferengi in you to be wondering how you can make some money out of this, should this all be true and not just fever dreams from your humble blogger (and, strangely, Jim Rickards), consider the following scenario.  In gold and silver mining, companies are broadly sorted by size into what are called juniors and majors.  Juniors are the startups; the hotshot geologist and a small group who go prospecting and find the new deposits to mine.  The majors leave this work to them because it's highly risky.  A lot of juniors go broke working on a deposit that doesn't end up being worthwhile.  On the other hand, once the juniors find a good deposit and start extracting the gold, the majors buy them out.  There's a similar stratification in the oil world, too, with smaller companies and the vast multinational majors.

In this case, the juniors are likely to get squeezed out.  The small budget American frackers are going to be in trouble.  The big Majors, though, have the resources and intercontinental connections to survive it.  Those companies will go on a buying spree, picking up sources for pennies on the dollar starting soon (if they haven't already) and stretching through '16.  If this happens in 2017 as outlined, they'll start making money at a prodigious rate.

Standard disclaimer: I'm not an expert in this stuff at all.  I'm just some random dood on the Intertubes with a blog.  I just observe things and think about them.  If you're taking advise from random people on the Web, you deserve what you get. 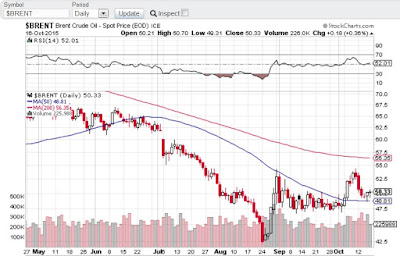 Brent Crude - one of several benchmark prices for crude oil.  Looks like it's staying in a trading range to me!