I had a question from an emailer, rather than a comment, to my post two weeks ago about getting back to cycling after long break.  In it's essence: what's different about cycling after being away a long time?

I answered by email, but thought there might be someone else in the wild world of the internet that cares, so I thought I'd re-post it here.

The short answer is: not much.  If you're not on the bleeding edge of technology trying to get every last gram out of your racing bike and willing to spend thousands of bucks to do that.

The single biggest thing, and the only thing I've actually bought (other than replacements for some gear that just wore out) is one simple idea: daytime running lights.  The same high-capacity, rechargeable, lithium ion batteries that have pushed into our phones, tablets, laptops and so many other things have pushed into cycling headlights and taillights.  Most of them are sold with a USB charger cable to plug into your laptop or other USB charger.

For my headlight, I bought a Cygolite Dash 460 headlight.  These are more for being seen than seeing; at least from my use.  With 460 lumens, though, they'll make a good headlight at night, too.  Here's mine on my everyday ride - the weird background is a tire on my garden cart standing up in the shop. 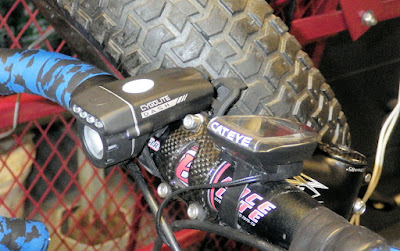 Similarly, I got a Cygolite Hotshot Pro taillight, with 200 lumen output.  In this case, though, I had originally bought a light recommended on a bike forum that I also got from Amazon, a Blitzu.  This one gave me troubles and the USB charging port broke off the printed circuit board in the unit, leading to replacing it with this Cygolite.  I would recommend the Cygolite over the Blitzu.

I have more experience with Cygolite as a brand.  Back in the days when Mrs. Graybeard and I used to ride in the evening after work, I had a couple of Cygolite headlights and they still work (although the 10 year old NiCd and NiMH batteries have long since gone belly up).

Both my head and taillights are set to flash and they incorporate a pattern that isn't metronome steady.  There are tests that say the irregular flashes are more noticeable and a regular flash.  That said, I'm not aware of any studies that demonstrate riders with daytime running lights are safer than those without them, it just seems to be a reasonable bet.  They should give me something like six hours on a charge, but I recharge them after each hour ride.  I'll try long tests someday.

Let me just list throw out some of the other changes in the things I know
Finally, it seems as if titanium bikes, like my Airborne, didn't really take over the market as the true believers thought back in 2000 or 2005.  Carbon fiber has become the material for lightweight racing bikes and the choices are still largely carbon fiber vs. aluminum or high-end steel.  There are still titanium bikes made in the US (Litespeed in Tennessee and Habanero down the coast in south Florida to name two).  I would think titanium would have the advantage due to the frame being weldable, but I guess carbon fiber has gotten less mysterious to repair.