Monday morning, with a 9:56 AM launch time SpaceX set a few notable firsts in their history.  The mission was to launch another 60 of their Starlink internet satellites, and that succeeded.  The notable firsts:
Everyone knows about the recovery of their boosters, the most expensive portion of the rocket.  It took SpaceX Engineers a while to get the details down, but once they landed the first couple, the failures have been very rare.

During the last minute of the booster return flight, the video feed went down and it looked like we wouldn't see the landing of the booster on recovery ship OCISLY (Of Course I Still Love You); but it suddenly woke up just as the ship's deck started to be illuminated by the landing burn of the returning booster.  I was able to screen capture this a second before landing. 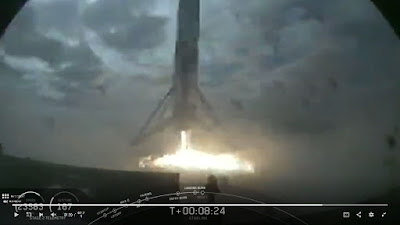 Regarding the fairings, though, Space.com puts it this way:


SpaceX uses identical fairings for its Falcon 9 and Falcon Heavy rockets. Each one costs about $6 million (roughly 10% of the $62 million Falcon 9 price tag) so there's a significant financial incentive to recover and reuse the fairings. SpaceX fairings are composed of two halves, each of which is equipped with small steering thrusters and parachute-like equipment to aid in recovery efforts.
...
Both ships deployed in advance of Monday’s launch attempt in hopes of snagging the fairing halves. Unfortunately rough seas thwarted an attempt at another catch.

The fairing flown on Monday was from last April's Falcon Heavy launch of the Arabsat-6A communications satellite. SpaceX did not specify what sort of refurbishments the fairing halves have gone through or how many times they expect to reuse a recovered fairing.

As for Starlink satellite themselves, this launch of 60 gives 120 of the prototypes for experimentation. They're in use now, but as SpaceX says, “We still have a long way to go from tweets to 4K videos, but we are on our way,” with the goal for the eventual number being “12,000 satellites, the company plans for its burgeoning cluster to eventually be more than 40,000 satellites strong.”  Say that again to yourself: 40,000 satellites in low earth orbit. 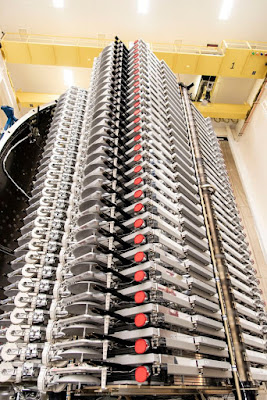 Recovering boosters, recovering fairings,  they seem to be moving toward learning how to recover upper stages, which could reduce the cost of a flight to essentially the cost of fuel.  Manufacturing, launching, and operating 12,000 to 40,000 satellites.  You can't accuse these guys of not being visionary.