On the Cartel Slaughter, Calls for General Pershing, and The Bigger Picture

In light of the brutal slaughter of an American Mormon family apparently by drug cartel members in Northern Mexico, there's a palpable “why are we allowing this?” mood in the blogosphere.  There are calls for a modern day General John “Black Jack” Pershing to go into Mexico and wipe out the cartels.  I don't have problem with that, myself.  If we know who killed this family, that cartel should be asking for an 0300 visit, but I wouldn't do it with valuable operators like we did with Al Baghdadi.  A visit by an air wing of A-10s, B-2s, or a few C-130s with MOABs seems adequate.

The problem isn't our lack of a general who could wipe out the Mexican military, should they decide to get in the way.  The problem is that this is a tangled web that covers both sides of the border, and if we're going to wipe out this sort of problem, both sides need targeted raids.

Back in August of 2012, I posted about an interesting article I ran across with details on the Fast and Furious gun running program that Barack Obama and his Attorney General Eric Holder had implemented.  It was widely believed that the purpose of F&F was to show American guns are ending up in Mexico as some sort of argument for more gun control.  A “logistics coordinator” for the Sinaloa cartel named Jesus Vicente Zambada-Niebla, had testified it wasn’t about tracking guns, it was about supplying them — all part of an elaborate agreement between the U.S. government and the Sinaloa Cartel to take down rival cartels.

In effect, the U.S. government was going to use the Sinaloa cartel to kill off the other cartels, and in return for getting rid of them, Uncle Sam was going to give Sinaloa the US drug market.

I re-visited the details of that 2012 story last July and found that the legal cases had gone forward but the story hadn't materially changed.


Since my knowledge of this story was essentially frozen in 2012, I looked up Jesus Vicente Zambada-Niebla (there are other family members in the cartel, so you have search the whole name) to find he did a plea deal with the feds to "cooperate with authorities" and potentially stay out of long term lockup.  I found a Forbes article from 2014 saying the same things as the Blaze article my post was based on in 2012.  I've not found anything conclusive saying it was admitted to in court, but there is evidence that the US deal with the Sinaloa cartel was real, and there's a trail of bodies to back it up.

By appearances, I see this as saying there are groups in the Deep State who are behind allowing the Sinaloa cartel to access US drug markets, and I've got to believe there's some money flowing north along with those drugs, to the pockets of the Deep State Actors on this side of the border who are profiting from the deal.  Those Actors are partly responsible for the deaths of those women and children in Mexico on Monday evening.  It's easy to say people dying from the War on Some Drugs are dying by their own choices.  These women and children were innocent bystanders who crossed some sort of invisible line and simply ended up in the wrong place at the wrong time. 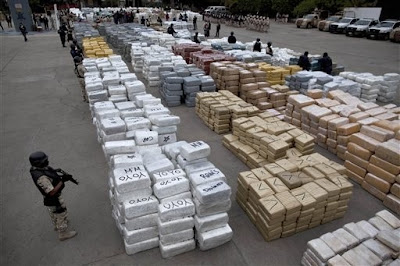