Was Fast and Furious Not About Gun Control?

An interesting article turned up on the Blaze today, about a high ranking member of the Sinaloa drug cartel alleging that F&F was not what we think it was.


It wasn’t about tracking guns, it was about supplying them — all part of an elaborate agreement between the U.S. government and Mexico’s powerful Sinaloa Cartel to take down rival cartels.

The explosive allegations are being made by Jesus Vicente Zambada-Niebla, known as the Sinaloa Cartel’s “logistics coordinator.” He was extradited to the Chicago last year to face federal drug charges.

Now Zambada-Niebla is not exactly up there in the realm of great character witnesses, right?  I mean, he is a logistician for the Sinaloa cartel, and desperately trying to win his freedom.  But there actually is some background that argues there might be truth here. According to the Blaze story:


Also, U.S. officials have previously acknowledged working with the Sinaloa Cartel through another informant,  Humberto Loya-Castro. He is also allegedly a high-ranking member of the Sinaloa Cartel as well as a close confidant and lawyer of “El Chapo” Guzman.

So this doesn't seem to be something completely out of the blue.  Perhaps it's just another side to a story that is leaking out.

Let's speculate on this for a minute.  The US would provide guns to Sinaloa; for information.  Then the US would use the info to kill off the competing cartels, yet another benefit to Sinaloa.  It seems that Sinaloa is getting all the benefits, and giving up nothing of value to them.  In fact, it seems that what the US DOJ/DEA offered Sinaloa was unrestricted access to the US drug markets - apparently for nothing.

So Sinaloa cartel got everything, and the US got nothing out of this?  Possibly, DOJ/DEA got only one cartel to deal with, and once the others were gone, they could "nuke" this one and be done with all of the cartels.  If that was their plan, I have a bridge I'd like to sell them.


The claims seem to fall in line with statements made last month by Guillermo Terrazas Villanueva, a spokesman for the Chihuahua state government in northern Mexico who said U.S. agencies ”don’t fight drug traffickers,“ instead ”they try to manage the drug trade.”

With an estimated 3000 Mexicans killed in the state of Sinaloa alone, including police, you can understand the Mexican state officials being upset with this. 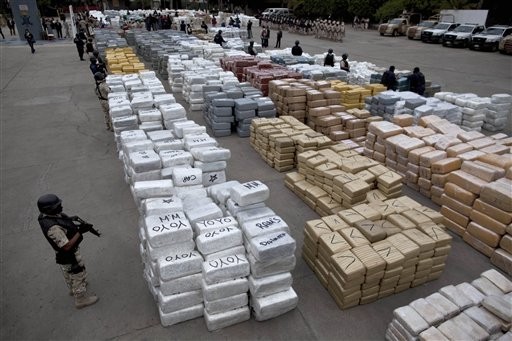 This could be an interesting trial - if it happens.  The Fed.gov is predictably playing the national security card, but the few terse statements and denials that they make seem to hint this isn't all bull crap.

I also want to note that even if this is true, it still doesn't mean the plan behind F&F was not intended to give leverage for gun seizure or control.  It could have been a happy "two-fer".