The Next Housing Collapse Has Been Set Up


Some time ago, I had concluded that the concentrated attacks on the US that the administration was advancing were coming so fast and furious (pardon the reference) that it took all of us working every available moment to alert each other.  We had to specialize: some take economics, some take regulations, some take gun control and so on.

Kevin over at the Smallest Minority caught an article no one else seems to be mentioning, and links to the piece in American Spectator by William Tucker.  The piece "And You Thought The Housing Crisis Was Over!" explains some new laws and regulations that appear to have been designed to cause a complete collapse of the US economy.  In this space, I've gone over before how the Jimmy Carter era Community Reinvestment Act started the chain of events that led to the crash of the subprime market, which caused the '08 crash.  It's a complicated chain, and (like I've also said) to get as screwed up as things were requires corrupt government as well as corrupt corporations.  Let me quote Tucker:


Do you remember that thing about how the banks wouldn't lend to blacks and Hispanics because they were racists? And do you remember how they passed the Community Reinvestment Act so that banks were forced to reduce down payments practically to zero and lend to a lot of people they knew were bad credit risks? And do you remember how Wall Street bundled all these risky subprime mortgages and sold them to investors around the world so that when it became clear that those people weren't going to be able to pay their mortgages banks everywhere were left holding the bag and all five of the Wall Street investment houses either went under or had to be bailed out by the federal government?

And do you remember how, when it was all over, liberals said it was actually the banks' fault for "deceiving" all those people into thinking they could afford to buy homes and that the banks should be punished for it and some of those people be allowed to keep their homes anyway? And do you remember how all this cost the government close to a trillion dollars and put the whole economy in a hole that we really haven't begun to dig ourselves out of yet?

Well, get ready because the whole thing is about to happen again.

As they say on those infomercials, "Wait!  There's more!!"


Moreover, this time they're going even further. They're going to take over the credit rating agencies and force them to change their standards to accommodate blacks and Hispanics so that nobody will have any idea who is a bad credit risk and who is not.

It says later in the article that credit agencies will be hammered to raise the credit scores of blacks and Hispanics.  This is going to destroy the banking system once and for all.  If nobody knows who a good credit risk is, they can't possibly survive loaning money.  If they can't survive loaning money, they won't lend money!  (By the law of unintended consequences.)  That means every business which depends on credit - which is to say every business - is going to be impacted greatly, if not shut down.  The only possible way this doesn't destroy the economy is if banks start only doing commercial loans with big companies they can trust.

What will this do to the economy?  I've performed realistic laboratory simulations involving hamsters wearing accountant's green eye shades and common sledge hammers, so I can honestly tell you it won't be pretty.  (It's amazing how much they look like a watermelon at a Gallagher show).

I can't resist giving out one more detail on this.  Guess who's behind this?


The principle instrument this time is not the Justice Department, Fannie Mae and Freddie Mac, as it was last time, but the brand-new Consumer Finance Protection Bureau, designed by good old Elizabeth "Nobody-Ever-Made-It-On-Their-Own" Warren, which should really be called the Bureau for Bringing Down the Entire Economy.

Oh, yeah.  I wrote about this when she took over the agency.   The twit who's campaigning on the platform that we should be more like China. Srsly. 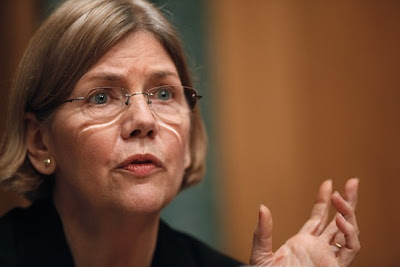 The Spectator piece - and you should RTWT - ends on a good note that I'll steal.


At this point in my story, it is customary for the journalist to proclaim that he isn't trying to protect the lenders but is really concerned with those unfortunate minority individuals who will end up with bad loans...

I think I'm going to have to depart from the tradition. I think what we are witnessing is the looting of America on behalf of minorities in a way that better end soon or we are going to bring the whole system down upon our heads.