The Latest Idiocy From the Enviro-Weenies

I hope this doesn't shock you or give you some sort of stress syndrome, but the greenies want humans to die off.  I've talked at some length here about Agenda 21 and the greenies who want to kill off most of humanity.  Tonight a slightly different tactic that may have the same desired effect.

Every electronic system you own is filled with joints between parts.  In the vast majority of those, the joint is soldered.  Most people probably know about solder, a metal that liquifies to create a joint, because soldering things is pretty common.  Plumbers solder copper pipes (when they still use copper pipes!), jewelers solder jewelry, and so on.  You may not realize, though, that European Union initiated a program in 2003 to eliminate lead in the solder used in electronics.  In 2006, the RoHS rules, short for Reduction of Hazardous Substances, went into effect banning the use of lead in solder.  In the hundred years since electronics went into routine production,  quite a bit of research went into creating the ideal solder alloy, and for most of that hundred years, a 63% tin 37% lead eutectic alloy has been preferred for most electronics soldering.  (Note: I couldn't tell you why, but RoHS is usually pronounced "row-hoss").

When the use of lead was ordered halted, joints had to be made somehow, so the industry desperately searched for a replacement, often creating components with bright tin coatings - which looked like a freshly soldered surface (commonly called a "tinned" surface, although it's solder).  Unfortunately, some of that hundred years of research had taught us that a bright tin surface is the worst thing you want to use, and that knowledge was somehow "lost".  Bright tin surfaces tend to grow "tin whiskers" which have caused many failures, and the matte finish tin finishes grow whiskers at a lower rate.  In one of the trade magazines, Avionics, author Walter Shawlee II writes:


This is a phenomenon so bizarre it almost sounds like science fiction, but it is all too real, and frequently fatal to circuit operation when it occurs. The chemical mechanism is poorly understood, but tin-plated leads and solder joints (without lead) begin to grow tiny straight hair-like crystals with or without current flowing. These can extend from track to track, pad to pad, between any leads and other metal areas. The tiny whiskers are highly conductive, and can result in catastrophic or intermittent circuit failure. Amazingly, no PCB surface treatment, post coating or solder masking will prevent it. This is a mechanism largely unique to tin (Sn) plating or solders that contain no lead, but can also occur in some other metals from palladium to zinc, but generally requires elevated temperatures or pressures, while tin whiskering occurs in all normal Earth environments, and even in space. 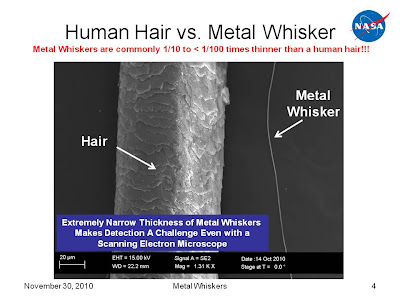 (image from NASA Goddard Space Flight Center)
When the ROHS rules were formulated, they specifically exempted high reliability areas like military, space or aviation, but missed something important.  The companies that make components don't want to have multiple production lines for their parts, and if they just have one line they'll make the line that sells the most, the lead-free line.  Companies in the "high reliability" sectors buy components that are lead-free, but then solder them with full lead solder to improve the reliability.  Even so, a few multi-million dollar satellites have been lost, and the failure attributed to whiskers.  Many more cheaper, earth-bound systems have failed and the whiskers found.  Tin whiskers have even been implicated in the Toyota "runaway acceleration" problem which has claimed a few lives.

But the RoHS lead-free policy is more stupid than anything.  By far, the biggest use of lead is in batteries and they were left alone!  Shawlee, again:


Just for some clarity, the total world use of lead is about 90 percent for batteries, and the amount used in electronics (excluding batteries) is all of 2 percent. So, of course, target the 2 percent. Further, of the lead in landfills (the supposed concern of this directive), the overwhelming majority is coming from the disposal of TV CRTs and monitors, which can contain up to 2 kg of lead per tube, not from circuit board assemblies, by a massive ratio of 9 to 1.

If you owned a bunch of CRTs and knew the ban was coming, what would you do?  Working CRTs were trashed to the landfills to get rid of them before penalties came into effect for not recycling them properly!


It’s rational to ask, after a few years of RoHS policy in force, does this effect ever really cause any problems? As it happens, yes, and some examples are so spectacular that it’s amazing they have not reversed the policy for RoHS. In Europe, the most impressive example was $1 billion recall of Swatch watches from Switzerland, as the use of lead-free solder caused a roughly 5 percent watch failure rate in 2006. The “solution” to this problem was yet another rule exemption, and lead was again used in Swatch construction. A real RoHS policy triumph there.

As you might gather from the Swatch and Toyota examples, this problem is happening in consumer systems.  The EU has mandated a new failure mode into every electronic item sold.  Don't think of just your TV or your MP3 player: newer cars have several microprocessors in them.  Don't forget your air conditioner, your range, the electronics embedded in everything.  When I was a kid, my parents had a black and white TV bought in the mid '50s; they junked it and we got our first color TV when I was 15.  My wife and I had an RCA color TV, our first "big screen" at 27", for 21 years.  I think it's a safe bet that the number of TVs being sold today which will last 21 years is going to be quite a bit smaller than it was before 2003.  The irony is that today's solid state electronics and LCD screens should be more reliable and last longer.  That means landfills will be getting more broken electronics than they need to.  Another stunning policy victory for the environment right there, too. 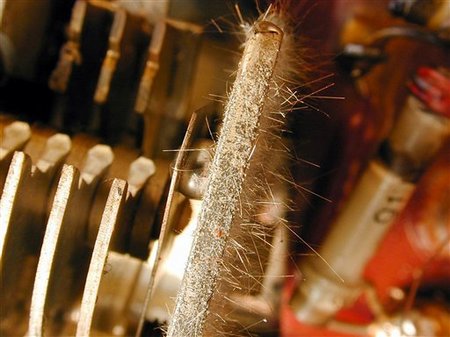