The Immorality of Obamacare

One of my new friends at work over the last year is a Romanian who came to work at our place after a stint with the Canadian Space Agency.  He is settling into the US and working toward citizenship, and like everyone I've ever known from a communist country, is adamantly against Obamacare and the other creeping attacking socialist policies being shoved down our throats.   Having grown up under Nikolai Ceausescu and lived under that totalitarian regime, his experiences provide interesting perspectives.  While I've only chatted with a relative handful of eastern Europeans, I grew up in Miami with many friends who fled Cuba at various times - and I still keep in touch with events down there, mostly reading the exile community.

One of the worst parts of socialist takeover is when they take over the medical community/industry and use it as a weapon of the state.  Healthcare as a target, a means to total control over the population has always been a goal and always will be so.  Peter over at Bayou Renaissance Man linked to an extremely important post from Ion Mihai Pacepa at PJ Media, "Romania's 20 Year Nightmare: Unraveling Socialized Healthcare".  I will quote some excerpts to get you to go read it.


In my other life in Communist Romania, I managed a large intelligence organization that, among other tasks, was charged with keeping alive a nationalized health care system which in the end bankrupted the country and generated popular contempt. That system, very similar to the Affordable Health Care for America Act, was a bureaucratic nightmare. And it still is a nightmare in the former Soviet empire.
...
In the U.S., the doctor is king. This is crucial for saving people’s lives. If the doctor thinks there is something wrong with his patient, he can immediately start all kinds of diagnostic tests, get the results as soon as possible, and start treatment immediately. Yet in Great Britain, where the nationalized health care system is managed by bureaucrats, a patient has to wait some 18 weeks for an MRI.
...
In the U.S., a person can be scheduled for surgery the next day, but in Canada’s nationalized health care system, one has to wait months for a surgery. In the U.S., a doctor’s ability to act quickly without having to wait for bureaucratic approvals can make the difference between life and death.
...
The Nobel Prize for medicine tells the rest of the story. During the last century, the United States’ free market medical care system was rewarded with 72 Nobel prizes. The Soviet Union, which invented the nationalized health care system, won none. Zero. (Tsarist Russia did get one Nobel Prize for medicine in 1904, for Pavlov’s conditional reflex theory.)
...
There is no better way to visualize the eventual disaster that a nationalized health care system can generate than to watch The Death of Mr. Lazarescu. This movie was inspired by the heartbreaking true story of Constantin Nica, a real retired Romanian engineer who had the misfortune of growing old in a country that still maintained a nightmarish government health care bureaucracy twenty years after its last Communist dictator was gunned down by his own people.
...
I have written elsewhere — but it is worth repeating — about another disastrous consequence of a health care system run by bureaucrats: baksheesh. People in the U.S. are not used to having to pay bribes to get things done. In Communist Romania, however, baksheesh was the only way to get an appointment with a reliable doctor or a clean bed in a hospital. In 2008 The Lancet reported that in Russia each doctor and nurse still had “his or her little tax,” and that “they all prefer cash in envelopes, of course.” Nurses took 50 rubles to empty a bedpan and 200 rubles to give an enema. Operations started at 300 rubles, but “the sky’s the limit.”[iv] In the U.S., baksheesh might not start out as such blatant bribes, but bribery is sure to soon become the rule in one way or another. ...

This is a very important piece and you should really RTWT.  We need to know these facts ourselves and be able to recount them so that when some useful idiot prattles on like this one over BRM, maybe we could load the facts on the end of a clue by four and implant those facts. 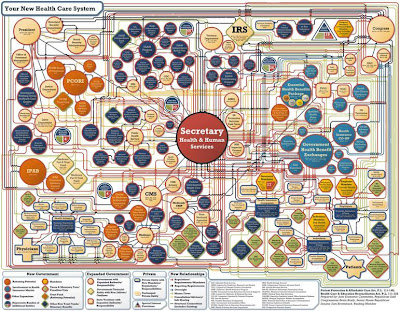