If you've been here a few times, you'll know that beside common sense economics and playing with guns, one of my favorite topics is over regulation, and especially the costs it imposes on us - dollar costs, or costs in freedom.  In addition to my series "More Tales From the Over Regulated State", I posted back in March about a web site we could go to, Regulations.gov, that tells us how many regulations are being created.  That post had this line:

It's interesting that this wasn't some sort of unusual number.  They weren't rushing to meet some deadline, some sort of perverse "rush job", and put out a lot of extra regulations; no, they do it all the time.  Here's today's screen capture: 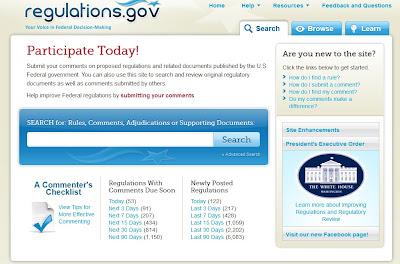 You can see in the last 90 days (it has been about 120 since that post on March 5th), they have issued 6083 new regulations.  I've checked it now and then since March and always found it around 6000 regulations in 90 days; 2000 per month, 125-ish per day.  Some of these are just bureaucratic flotsam and jetsam; mind-numbingly routine things like "Olives Grown in California: Increased Assessment Rate" - others will bring major, expensive changes.

John Ransom, over at Townhall.com is on this topic, too, today in "The Last Socialist in America"; wishfully thinking that Americans are so disgusted by the mess the current administration is making that there will never be another socialist in office in this country.  He talks about a study "Red Tape Rising" from the Heritage Foundation on the impacts and cost of these regulations:


“Overall, the Obama Administration imposed 75 new major regulations from January 2009 to mid-FY 2011, with annual costs of $38 billion,” reports Heritage.  In contrast, there were only six deregulatory actions by the Obama administration saving $1.5 billion says the Heritage report.  (emphasis added)

Before I drop the next sentence, I want to remind you that our annual budget deficit is about $1.3 trillion dollars.


In terms of the overall impact on the economic health of the country, the figure is much higher.  “More specifically, the total cost of federal regulations has increased to $1.75 trillion,” writes the federal government’s own Small Business Administration

Which, of course, says the cost of regulation is bigger than the budget deficit.  That's how much more money could be flowing into the pockets of Americans without this regulatory burden.  Furthermore, with an administration that has demonstrated cronyism over and over, it shouldn't be a surprise that small businesses bear a bigger chunk of this regulatory cost - a tax by any other name - than the big campaign donors - um - big companies.   According to the Small Business Administration:


Because it prevents the creation of more jobs, however, it hits the poor and middle class particularly hard, “while the updated cost per employee for firms with fewer than 20 employees is now $10,585 (a 36 percent differ­ence between the costs incurred by small firms when compared with their larger counterparts),” says the SBA  In other words, small employers take it on the chin even harder than the big guys. While Obama’s rhetoric panders to the little guys, his actions seemed geared to favor the big guys instead.

The Code of Federal Regulations expanded to 163,000 pages in 2009, and the rate of growth is accelerating.  The number of "major" regulations continues to grow.

A year ago, I asked, "How Many Federal Crimes Did You Commit Today?", quoting author Harry Silvergate from Reason Magazine saying the average person commits three federal crimes per day.  Don't think that not knowing if something is illegal is any excuse;  there are many people in jail who had no idea they were doing anything wrong.

The register Code of Federal Regulations hit a record 163,000 pages in 2009 and the number of pending regulations costing more than $100 million has more than doubled according to Heritage. And once on the books, regulations are almost impossible to get rid of. One regulation that’s been requested for elimination for over four years, says Heritage, is one that treats “milk as an ‘oil,’ thus requiring dairy spills to be treated as hazardous. According to the agency, exempting milk from the regulation will save dairies around $1.4 billion over the next 10 years.” And yet this regulation still sits on the books four years later, even with the support of the Obama administration in getting rid of it.

Now, according to the Center for Fiscal Accountability, when we add in the costs of [implementation] of just Obamacare over the next ten years the costs soar another $230 billion per year.

Not including the costs of premiums going up - which is already the case for many people.

We are becoming a country bound by our regulations, unable to move, and society is becoming a make work program for lawyers in which whether you are free or in prison is just a matter of luck.  Everyone violates three federal laws per day, some just happen to get caught in the "system".  You are at the mercy of whoever decides to find something to charge you with, because anything can be argued to be illegal.

The 163,000 ++ page Code of Federal Regulations must be cut down in size.  I swear you could throw out 3/4 of it and not negatively impact a single person's life - except for the lawyers and prosecutors who would need to find honest work.