What Do You Think is Coming

Kerodin over at III Percent Patriots started an interesting thread the other day, and although I think I'm a bit late to comment, I think this would a good meme for us all to comment on.  I encourage everyone to comment to Kerodin, and want to encourage folks to comment on their own blogs.  The topic is what you think is coming.  Following this are my thoughts.  Extra credit for predicting when...

What threats do you anticipate?  What do you think is coming?  A bad hair day, or Doomsday?

Nuclear exchanges?  Not likely at all. The only way another country would nuke the US is if Obama succeeds in reducing us to zero warheads (and is apparently trying).  The more likely nuclear event is a single attack, like an EMP from a "rouge nation", or a nuclear terrorism event.  Both are more likely than exchanges.  Chances of both go up if the originator could have complete plausible deniability.

Bio hazard/disease (whether deliberate or not)  An eventual pandemic is a certainty in the light of history.  Predicting when is impossible.  Widespread cholera and other lack-of-hygiene disease epidemics are inevitable after an economic/social collapse.

Violence, hordes, some in possession of light armor they confiscate from DHS/local LEO.  If the previous two happen, this would go with them.

Full scale martial law including .mil assets employed against us all.  Possible, depending on how bad the violence after collapse gets - it would require leviathan to have not collapsed and still have a full scale military to command.   You can't order the .mil around if you don't have a functioning command structure, so full scale collapse largely rules this out.

UN "invited" in to enslave us all?  Low probability.  The UN couldn't figure out how wipe it's ass without the US. It couldn't even find it's own ass with both hands and a GPS.

Full scale land invasion from Mexico, China, Russia, whoever?  As in tanks, air cover, bombing, etc.? Highly unlikely, unless we have no military at all.

A bad decade but we will slowly grind our way out of it?  Most optimistic possible and least likely version of the economic collapse.

Complete devaluation of FRN's and a reversion of precious metals and barter, at least for a while?  Goes with the economic collapse, and is going on now, to some degree. 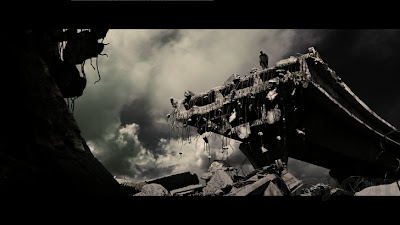 (from the Book of Eli)