Everybody Talks About the Weather...

Mark Twain famously observed, "everybody talks about the weather, but nobody does anything about it".  Some time in the last 20 years, undoubtedly driven by the climate change hysteria, we seem to have lost the historical perception that weather changes.  As the saying goes, "climate is what you expect,  weather is what you get".  It's mathematically impossible to predict weather over long periods of time for large areas; a discovery by Edward Lorenz during computer modeling of weather systems was one of the origins of what came to be called Chaos Theory.  Chaos theory frequently ends up focused on the behavior of systems of partial differential equations, and their "sensitive dependence on initial conditions".  A whole popular vocabulary sprung up around this: think of the butterfly effect - the idea that a butterfly flapping its wings today affects the development of a storm a thousand miles away in a week.

The partial differential equations that describe the behavior of fluids, like the atmosphere and water - the equations of fluid dynamics - are inherently unsolvable.  It's like 18 equations in 20 unknowns (IIRC).  The only way to solve a system of these is to assign initial conditions to some of the equations, creating a boundary condition. 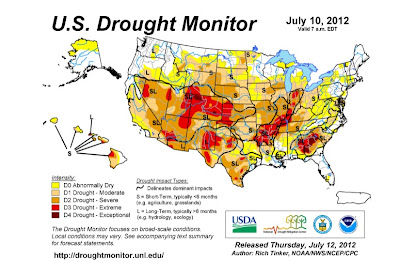 The US Drought monitor shows that our friends in the middle of the country, from Indiana, Kentucky and Tennessee west through much of the bread basket of the US are suffering a serious drought.  The map shows the broad reach of the severe to exceptional drought.  Friends and family in this region are relaying temperatures in the upper 90s to over 100.  I don't need to tell you these are extremely unusual events up there.  Just as strangely, here in the Silicon Swamp, the summer has been mild and wet.  Yes, it gets into the lower 90s here, but days like yesterday, when it starts raining early and stays cloudy all day, our high was 85.  The month of June had an average high temperature almost a full four degrees cooler than average, and a rainfall one and half inches wetter than average.

The vagaries of weather.  Strange that it should be hotter in Hoosieropolis than Florida, but it has been.

I've quoted Dr. Ryan Maue at Florida State University before, a young Ph.D. studying tropical weather systems.  I dropped by today to see if there was anything going on in the tropics to be aware of, and found this interesting item:

The lowest number of storms in two calendar years and in 24 continuous months.  Bear this in mind the next time you come across someone saying that global warming or whatever they call it this week is causing more hurricanes and more severe hurricanes, direct them to Dr. Maue.

This, too, is the vagaries of weather.