The Good Side of the News

There were plenty of attacks on gun owners this week, but there has been some good news, too.  In no particular order:

The UN Arms Trade Treaty talks broke down without an agreement.  The NRA is claiming credit, and may have had influence, although I guess things like this are hard to really assign credit for.  It might be the roaches knew the lights were on, and didn't want to be seen publicly.  They are not gone,  merely looking for a less well-lit place.   It may well be that they realized they could not get a treaty past the US Senate, with 51 senators going on public record to oppose the treaty.

In response to the Aurora shootings, Colorado citizens proved they are well-grounded in reality and hit the gun stores in record numbers.


"It's been insane," Jake Meyers, an employee at Rocky Mountain Guns and Ammo in Parker, [Colorado] said Monday.

When he arrived at work Friday morning — just hours after a gunman killed 12 and injured 58 others at the Century Aurora 16 theater — there already were 15 to 20 people waiting outside the store, Meyers said.

It's hard to know how much of this is "I'd better get it now, just in case they make it illegal" and how much is folks saying, that neighbor or that guy at work is right, and maybe they'd better get a gun and learn to use it.  There is definitely some of that second reason going on here, because gun store employee Meyers went on to say:


He called Monday "probably the busiest Monday all year" and said the basic firearms classes that he and the store's owner teach are booked solid for the next three weeks, something that hadn't happened all year.

It's a reaction that's uniquely American.  Unlike the European empires they're trying to remake us into, we don't have a history of looking to a benevolent king to manage us - until about 1930.  Historically, we are a nation that believes we're Captain Of Our Own Ship.  People are voting with their feet and wallets on the question of whether they believe gun control makes sense, and it's a resounding "no".

As I said last weekend, we attended the local gun show, and business was brisk.  Sunday morning we took our EBRs to the club's 100 and 200 yard range.  They must be defective, because unlike Barbara Feinstein's comment that the only reason they exist is “to kill as many people as possible in as short a time as possible,”  I don't think they've even killed a fly (there's a special gun for that).  Maybe a bacteria or hapless gnat.  They just seem to punch holes in paper and particle board.

The recent talk about printing a lower receiver reminded me of the cutting board AR receiver many of us talked about in January.  I saw a polymer AR receiver at our gun show.  This, of course, is my home made AR machined from an aluminum 80% lower and 75 or 80% DPMS parts. 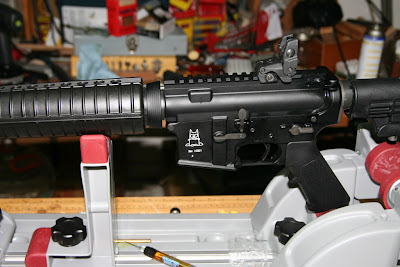 Posted by SiGraybeard at 3:32 PM