Seems Old Sol woke up from its pretty anemic solar cycle yesterday and let fly an X 1.4 flare and CME directly at us.  It's the first X-class flare in a while and "the biggest of the summer" - although with summer about 3 weeks old, that doesn't mean much.  More specifically, it is nowhere near as powerful as the 5.4 flare we had in March, which caused some cool aurora displays - along with some folks' panties getting in a bunch.

What's kind of interesting here is that NOAA, who does the official space weather forecast, and NASA are quite at odds with each other over the expected impacts of the CME due on Saturday.  As the Washington Post reports (at that link):


This blast of charged particles, known as a coronal mass ejection (CME), is forecast to ignite a geomagnetic storm on Earth over the weekend. NOAA predicts it will be minor, maybe moderate. NASA says it will be moderate to severe.

Personally, as someone who observes this sort of stuff and its effects, I'm going with NOAA: minor, maybe moderate.  Auroras visible south of Michigan, say, but probably not into the deep south.  It seems to take an X6 flare to get auroras visible in Dixie, and an epic flare to get them down here into Florida.  But why should NASA and NOAA differ so much?  It's not like NASA should have data that they hoard and don't pass on to NOAA.  Quoting again:


The differences in these predictions raise the question why two government agencies aren’t coordinating and issuing one clear, consistent forecast along with estimates of the uncertainty.

Consider this scenario: A hurricane is approaching the East Coast. What if one U.S. government agency predicted the storm would make landfall as a category 1 to maybe category 2 storm, at worst, while another agency forecast the storm to reach the category 2, 3 or even 4 level? Imagine the widespread confusion that would ensue. How would anyone know if and how to prepare?

In terms of effects, if you go with NOAA's predictions, you're not likely to see any effects other than some pretty lights in the sky, if you're out in a really dark spot; if you're a ham, HF propagation might be disturbed, giving higher noise levels or shutting down HF.  (Some of this happened yesterday).  If NASA's predictions are right, the auroras will come farther south, radio will be disturbed more, and - this might be important - satellites may need to be re-oriented or shut down.  Maybe the reason NASA is going for the worst possible prediction is to protect satellite operators better.  After all, NASA doesn't loose any revenue if satellite operators shut down when they really didn't need to.

I need to point out that space weather isn't as well understood as earthly weather, and predicting rain  messes us up often enough.  I'm not calling them stupid.  I just think they should be working a little closer together on this. 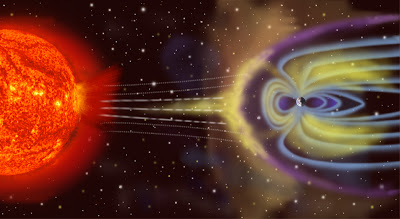 Image from Wikipedia - showing the CME blasting out of the sun, interacting with the earth's magnetosphere and causing auroras at both poles.

For the record, NASA is saying:

To reiterate, I bet with NOAA on this one.  No damage to the grid or any of the dire scenarios that get talked about.
Posted by SiGraybeard at 8:59 PM