How Deep and How Long Is This Recession?

I haven't run this plot in a while.  From the fine folks at the Calculated Risk Blog: 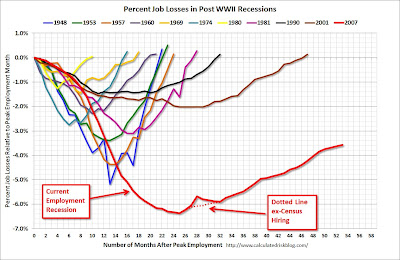 This shows the extent of the unemployment in every recession since WWII, and shows how the current crisis is - by far - the deepest and longest  recession in the set.  That much is obvious.  I want to point out something that may not be so obvious: note the curves where they return to 0% job loss compared to the peak employment before the recession.  Note that from right to left, the longest recessions are the current one, 2001, 1990, and 1981 in chronological order.  The spoiler is that the next longest one, the recession of 1957, seemed particularly deep and long.  I find the stretching out to the right of the '81 to 2001 recessions interesting, because it appears that recessions are getting both longer and deeper.

You can see that the red curve is not half way back to pre-recession levels.  It looks like it would make it to the halfway back point at 60 months - 5 years - since the start.  I estimate if that continues, employment would get back to pre-recession levels in another 3 to 4 years, just by eyeballing the chart.  But that's probably not going to happen because all indicators are that line is going to flatten out, or start heading down again.

If you visit here regularly, I don't have to tell you I believe this is the result of the steadily increasing involvement of the government in "fixing" things.  The more they try to fix, the longer recessions take to heal.  Didn't their moms ever tell them, "stop picking at it, or it will never get better"?  Same basic idea.