Lord I Was Born a Rambling Man...

With apologies to the Allman Brothers, some Saturday ramblings.

The gratuitous cool picture of the day is courtesy of the Astronomy Picture of the Day (APOD) and NASA.  Break out your Red/Blue Stereo glasses for this.  (What?  You don't have any?  What kind of nerd are you?  I have two within arms reach and that's just a start!) 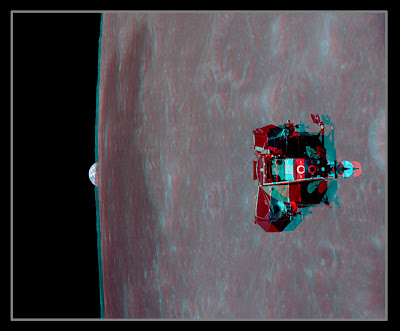 43 years ago this week "..men from the planet Earth first set foot on the moon".  While we lived in South Florida, 250 miles or so south of the KSC, we were in New York City visiting relatives.  I was a teenager.  It would be the last time I would see some of them, and 12 years before I'd see others.  Somewhere around here I have small prints of pictures I took of the crew of Apollo 11, at an anniversary celebration for KSC Employees and families, when Mrs. Graybeard was working on the Space Shuttle solid rocket boosters.  Ought to scan those in before they fade away.

A year ago, the last space shuttle mission shut down.  Outsourcing?  We've outsourced manned flight to low earth orbit to the Russians.  Yeah, I know "people are working on it".  It still burns.

In light of the Colorado shootings, the left is already politicizing the event and Mayor Bloomberg - the most dependable a**hole in American politics - is already using it as a bludgeon to get more gun control into discussion.  And while I'm not quite ready to go there, isn't it interesting how a 20-something studying for a Ph.D, that is a "starving college student", gets together an easy 5 or $10,000 worth of hardware (a good AR-15, a Remmy 870, a Glock, body armor, ballistic helmet, and other cool toys, not to mention the bomb-laden apartment).  And isn't it just a tremendous coincidence that this "shy college student" pulls off a mass shooting the very week the UN is having their Arms Trade Treaty up for final review? To be honest, the only thing that doesn't lead in that direction is the report that his mother said, "You have the right person".  Clearly Momma was aware that elevator didn't go all the way to the top floor.  But, as Rod used to say, "offered for your consideration".

Early this year, I would have said we are easily winning the war against guns.  Now, I'm afraid that we're going to have start fighting a rear guard action over this.  As the year was starting, I was thinking it was looking good for open carry or constitutional carry in Florida, and maybe at the national level looking good to get silencers removed from Class III and at the very least made a $5 AOW.   Then came Zimmerman/Martin and now this, and I'm afraid we'll have to re-fight the battles we've already won.

On the other hand... I just got back from the local Gun Show.  It was elbow to elbow, butt to butt crowded, as much as during the 2009 boom, and the cross section of society was amazing and heartwarming.  Kids that looked barely 21 (I'm a bad judge of that), folks my age and older.  All races, all sizes, young couples, older couples; everything from "tacticool mall ninjas" to "Ma and Pa Kettle" - so the population is clearly voting with their wallets.  The so-called "concealed carry class" looked to be pretty full.  At one point (while dear wife was looking through 30 year old ... junk) I stood and just looked at the crowd.  It was truly awesome to see.