To be honest, the only thing that doesn't lead in that direction is the report that his mother said, "You have the right person".  Clearly Momma was aware that elevator didn't go all the way to the top floor.

In truth, it looks like ABC lied about her; she wasn't referring to her son, she was referring to herself. It's the same sort of bad reporting as when Brian Ross leapt to the conclusion that a person in the Colorado tea party with the same name as the shooter must be the killer.  (H/T Townhall.com)

Perhaps you've heard by now that Brian Ross has a shady record himself.  Brian Ross was arrested in St. Albans, Vermont in connection with a murder case.


Four of the five suspects arrested made their appearance in court today. Police say Travis Bugbee and Brian Ross lured Davis to the St. Albans swimming pool on March 21.

As if that wasn't bad enough, Brian Ross was arrested in Fontona, California for sending explicit text and photos to teenage girls.


Brian John Ross was arrested at 5:35 p.m. Thursday at Sierra and Merrill avenues in Fontana and booked on suspicion of contacting a minor and arranging to meet with a minor via the Internet for the purpose of having sex, jail records show. His bail is $50,000.

What?  No, neither one of those is the same Brian Ross as the one on ABC news, but I'm just using the same journalistic standards he is.  Which is "none". 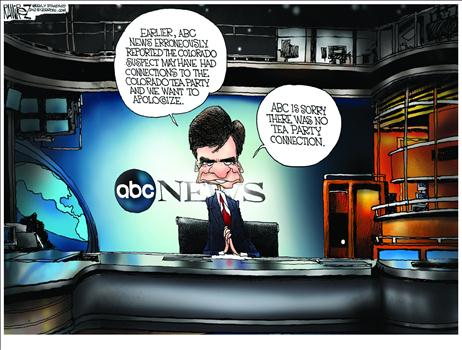