A Little More on the Lemming-like March into the Abyss


In your lifetime, can you definitively point to any national election which resulted in a restoration and practice of supposed constitutional values and principles?

Can you give any example anywhere in the world, from any time period when people voted themselves free? When any government voluntarily restrained & limited itself?

With the upcoming national election we are presented the “choice” between the former governor of the most liberal state in the union, and a marxist homosexual. Both candidates support abortion, both support a state seizure of health care, both support cradle to grave meddling in the lives of free individuals.

Please consider – what substantive policies of the Bush administration has Obama overturned? Any? And what policies of Obama has his supposed former rival McCain railed against? Any? Why not? The answer is that we have been continually presented with false opposites. The entire system is designed to perpetuate itself, while pretending that a choice exists. Any supposed differences put forth are merely of degree, of style, not of kind. The growth is always in one direction, and that direction is worship of an all powerful state.

How did this happen? It happened because our entire process of thinking, of acting, of viewing persons and events has been corrupted – by design. When we are opposed to X, we are conditioned to support those who are X-1, not realizing there simply is no real difference. A (mandatory) choice between A or B eliminates the possibility that we might otherwise choose none of the above.

Time to quit playing the rigged game. Recognize the process, the system for what it is – a fraud. Voting for a new master every few years does not make us free. It does not promote our beliefs or values.

It is false hope in a device that always disappoints

To begin with, of course, I can't tell you of a single time voting to reform a nation has ever worked.  I don't believe it has ever been done.  On the other hand, I don't believe any country that has collapsed even had the mechanism to have such a vote.  There is a difference, however, between saying something has never been done and saying something can not be done.  At first glance, that may sound like the commies who say Marxism has failed every time only because the right people didn't try it.  The first difference is that communism goes against human nature and (going all Christian on you) against the will of God. Second, simply no other nation was founded like this one.

Note that I did not say voting ends this and gets us out of this mess.  I said,


Many of us have said many times that we are not voting our way out of this, and that is absolutely true.  However, voting is part of the process of getting out of this.

To drag in the term mathematicians use, voting in a smaller government is a necessary condition, but it's not sufficient.  Voting, by itself, will not change things for the better.

See, you say - with ample evidence - that the system is rigged; that the problem is the system.  I believe the problem is the people.  The people have abdicated their responsibility to run things to slick talking politicians who promised to do all that dirty work for us.  The people let the system be formed.  And that's not to be too hard on the people; everyone was living their lives, building their careers or families.  Their problem was that they trusted the used car salesmen (politicians).  Besides, it's simply easier to sit around and just vote D or R than to challenge yourself to think about every issue.

The founding fathers, however, left us a system with the chance to change everything.  The key is the very first words of the Declaration: We The People.  We have the power to change everything.  Politicians, parasites that they are, are addicted to their power and perks, and like any drug-addled rat in a lab experiment, they will respond if we deny them their drug.  If the people dumped them regularly, they would respond to people's demands.  If the people - or a determined minority - demanded more liberty, I believe it would happen.  As you well know, the percentage of people actively involved in the American Revolution was not the vast majority.  It wasn't even a simple majority.  Social sciences researchers have shown in the last year that if as few as 10% of the population adopt a given opinion, it eventually takes over the population.  A good example is gun ownership.  Twenty years ago, 80% of the population wanted more gun control; today it has flipped to 80% saying to leave guns alone.  Better yet, consider the patriot movement (tea party, 9/12, etc.).   These basically started up in 2009 as people began waking up to how bad it has become.  After a few protests, they went to work quietly on getting like-minded candidates elected, and has been hitting a very good percentage.

I can't fix the system, but I can fix myself and my family.

The problem, of course, is the Free Sh*t Army, and the culture of "let someone else do it".  We have at least two generations of people brought up without seeing an adult go off to work.  Families broken - lives broken - as the inescapable result of evil government policy.  We have to fix the people. I'm not dumb enough to think this will go quickly or easily.  The mathematics is on our side, though.  If the country continues on our present course and we don't change spending, nobody is going to pay the FSA their benefits because the money won't be there.  The economy and country collapse.

It all may collapse, anyway.  Regardless of how much we try to change course.

I ask what's the alternative?  What do you mean by "Strike the root"?

I really see three main alternatives:  (a) try to fix the system  (b) start shooting (that is, destroy the system) or (c) withdraw - figuratively lay down and die.  It may be too late for any of them, but in my view, it's worth trying to fix things.

While I understand the sentiment to go off and try to be left alone, as we leave all others alone, that doesn't work.   The fed hydra won't leave us alone.  We could ask Randy Weaver how well that worked for him when the government was a small fraction of its current size.  Or the Branch Davidians.  Or Elian Gonzales' family.   Or Krister Evertson. 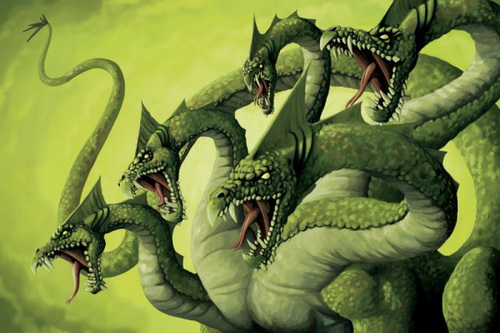 The hydra is a good model for the Fed.gov.  Chop off one head and another grows back.