So what did the Bernank do?  He did just about nothing, it's what he said.  He issued a tepid statement early in the day, 10 AM eastern, which is 8 AM out in Jackson Hole.  If they had announced the QE round, they probably would have issued that statement after the markets closed, at 3 or 4 PM out in Wyoming.  No, this appears to have been done to cause the market to go up.  My opinion only, of course.  The Blaze reported:


Chairman Ben Bernanke sent a clear message Friday that the Federal Reserve will do more to “help” the still-struggling U.S. economy. His remarks seemed to leave two questions: What exactly will the Fed do? And when?

The "what" is pretty obvious.  With interest rates essentially zero, there's not much room to lower them; what's another quarter percent going to do?  The "what" will have to be some form of QE, most likely buying more US Treasury bonds, as they've been doing for quite some time.  The Wall Street Journal put it this way:


Fed Chairman Ben Bernanke left almost no doubt this morning that he’s leaning toward another bond-buying program, quantitative easing,  a so-called QE3. He offered a studied defense of everything the Fed’s done so far, and he isn’t sold on economic growth. Inflation’s only a ghost, so the deck’s are clear on that front.

Inflation's only a ghost!  "That Minx!  What a lively sense of humor" (Otter - Animal House).  Food inflation of 10% is just a ghost!  Non-existent!  Hahahahahahahaha!  Wew.  After that knee slapper, the WSJ continues:


From our reading of the speech, it appears that Bernanke has given up on the idea of Congress stepping up and taking care of its business, which means he thinks the “fiscal cliff” will remain an issue through the November election and likely right up to the end of the year. The drag on the economy will only get worse the longer that hangs around, and that’s apparently unacceptable to the Fed chieftain. 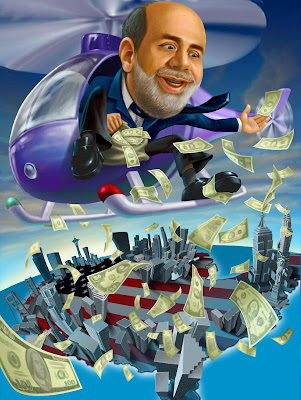