Most of us have posted a remembrance of Neil Armstrong.  I haven't.  But IMAO links to Daily Caller who links to the Obama campaign's own Tumblr page with this image: 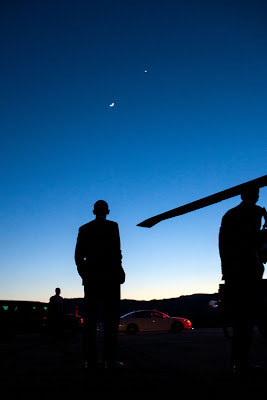 Yes, that's Mr. President himself.  He honors the death of a truly great man with picture of himself.  I'll be charitable and say I really doubt that he's personally involved in this sort of thing, and some kid campaign staffer chose this picture - "Hey!  We got any pictures of his Lordship and the moon?".  If it gets approved it's probably not a high-level insider like at Valerie Jarret's level.  No, I can't prove he had anything to do with it, and I can't prove he didn't.

Neil Armstrong was a remarkable man.  I won't go into details of his missions, his ability to fly the lunar lander "flying bedstead" as well as anyone, or recovering control of his Gemini spacecraft after the Centaur he docked with started swinging wildly out of control.  Those things are online.  What I find most remarkable about Armstrong is how he steadfastly refused any honor and accolades.  He was just doing his job, he was just the guy NASA called up for a tough mission, a mission with a large chance of not coming back from.  When he found that someone was selling autographs, he stopped giving them out, he didn't start charging.   He left NASA to go teach college and worked quietly at that.

In a day of people who are famous for being famous, and kids who rank fame above life's accomplishments, I find that really refreshing.  I have some pictures around here, from a 25th anniversary celebration of the landing, when Mrs. Graybeard worked on the Shuttle.  I have some pictures of all three of the crew.  Gotta find them and scan them in before they fade away.