Michael Bane's blog on Saturday covered an awful story about the hate being heaped on Olympic trap shooter Corey Cogdell.  It seems that, in addition to being an Olympic trap shooter, Corey's a hunter.  The ever-so-tolerant left* has showered Corey with an astonishing number of death threats, apparently for being a hunter. 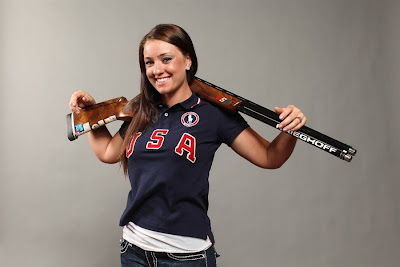 
I received a lovely email this morning, one that I would class as a thinly veiled threat to me and mine. It was, of course, obscene and unsigned (and neither the first I've received, nor, I imagine, the last), but I can share a bit of the joy with you:

Yet for all that venom, it is nothing compared to the deluge of sludge, including multiple death threats, that has fallen on Olympic trapshooter (and bronze medalist in 2008) Corey Cogdell, a fine athlete, an outstanding person...and a hunter.

Michael then links to Bitter at Shall Not Be Questioned:  article 1, and article 2.  Honestly, I won't print it here.  It dignifies these scum bags more than they deserve.

At least one of the national organizations, Safari Club International, is getting behind Corey, and they all should (Hint: NSSF - this is where you should shine).  Michael has an optimistic note to end on:


I have noted the increasing calls to violence among not just anti-hunting zealots, but anti-shooting (more correctly, anti-rights) zealots as well. I believe these increasing calls to violence are because we not only are winning, but have in fact won. Americans don't want more gun control, and Americans think hunting is a perfectly fine sport. The antis have thrown everything they had against us for the last 30 years, and the American people have responded by tuning them out.

In the egalitarian world of the Internet, it's possible that Corey, Michael, and others who have been targeted by the Anti-Hunting bozos will see this.  I stand with you in every way I can.

Addition:  Michele Malkin carried this story on her site Twitchy.