Time to Put On Your Fed Watching Gear

Tomorrow marks the annual meeting of the Federal Reserve Banks at Jackson Hole, Wyoming.  You may have noticed that most of the markets have been trading in a narrow range over the last week or so, IMO in anticipation of the direction that will come out of this meeting.  There was a run-up in prices toward the beginning of the month in anticipation of another round of free money, er, money printing, um, I mean quantitative easing.

Remember, one of the Rules of Trading is "buy on the rumor, sell on the fact".  The rumor clearly broke around the 20th.  So will there be another round of QE?

First, for new visitors, I'm essentially a student of the Austrian school, rather than a Keynesian.  That means I believe, as our constitution states, that money should be made from gold and silver; paper should be backed by that amount of gold and silver on demand - the way it was before 1973 when we broke all ties to the gold standard.  It also means, among other things, that I'm deeply suspicious of the utility of creating worthless money, backed by nothing other than "we say it's a dollar, so it's a dollar".  Anyone with any sense knows that the dollars they get are inherently worth less than the ones they are promised, yet they continue to take them.  The Keynesian world economy is a dance in which every partner is insane and disgusting, and the only way to "win" is to end up with the least insane and least disgusting.

On a more practical level, even if you are a Keynesian, one of the fundamentals of economics is the marginal utility function - the idea that, for example, if you're broke, your first $20 bill has high utility, while if you're a billionaire, another $20 bill doesn't add much utility.  If the first several trillion dollars were ineffective at turning things around, how many trillions will have to be created to make a difference?  The more dollars there are, the less they're worth - which is the cause of inflation.  How much inflation are they willing to create?  Are they willing to go all Zimbabwe and reduce the value of the dollar to the value of the paper?  That could be the outcome.  At the very least, anything you've saved for retirement will be inflated away to nothing.

On the other hand, from Bernanke's seat, it could be the only alternative.  The ECB is getting ready to print more to try to keep the EU from collapsing.  And Romney has already said that if he's elected, Bernanke is gone.   Although party platforms aren't really worth the paper they're printed on - no one is required to follow them (heck, no one is even required to read them) - the Stupid Platform says it's time to create a committee to study getting back on the gold standard - something last done during the Reagan administration.  (See  "Could the US Return to a Gold Standard" for some thoughts).  Since releasing an enormous amount of money is going to do something, perhaps that's enough to force Bernanke's hand, and have him do it.  Personal survival/job security.  He doesn't have to fix the economy, he just has to make it look good enough to get Bamster reelected.

You have to admit, the timing is perfect.  Not just a Friday press release, but a Friday on a holiday weekend?  This is when they tend to drop the bombs, after all. 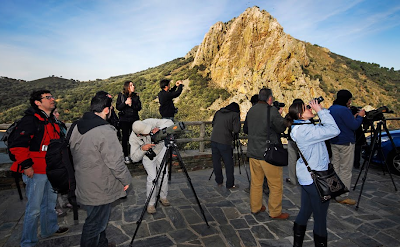 (Fed watchers gather in the mountains outside of Jackson Hole)