DHS To Purchase Another 750 Million Rounds Of Ammo??

This story has been making the rounds from Alex Jones Prison Planet.com.  Even Drudge had a link to the story buried in there that the National Weather Service wanted to buy 46,000 rounds of ammo.

So what's going on?  Good question.  The ammo is being ordered by the Federal Law Enforcement Training Center (FLETC) which seems to buy for all agencies.  Everyone seems to be saying it is for DHS only.  Consider Jones' opening paragraph:


Fears that federal authorities are preparing for mass civil unrest have increased after it was revealed that the Department of Homeland Security is planning to buy a further 750 million rounds of ammo in addition to the 450 million rounds of hollow point bullets already purchased earlier this year.

It links to this "Fed Biz Opps" listing.  That page looks like this: 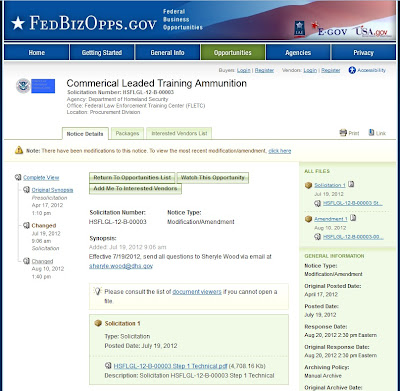 I downloaded the pdfs.  The original FBO was listed April 17 and is a pre-solicitation.  It says that a list of different ammo they want to buy will be provided, and if they like the deal and the quality they will buy more, but (here's the big part) they only commit to buy 1000 rounds of each line item for 5 years:


The Government guarantees a minimum of 1,000 rounds per year on each resultant contract. Contracts will be for a base year and four (4) 12 month option periods.

The list was released on July 19, and is a long list, with about 160 line items (rough count - I just scrolled through it).  Those lines may be a few thousand rounds over five years, or may be millions per line.  It includes, for example 3.14 million .357 SIG JHP rounds and 2000 rounds of .38 Special semi-wad cutter.

The second update, from August 10, is just answering some bidders' questions.  There are no increases in the ammo order.  For example, the first one is:

ANSWER - Yes, that would be acceptable.

All of the questions and answers are what I'd call "administrivia".

I think everyone knows the 450 million rounds deal may or may not be 450 million - it's the same type of deal,


The order comes under an indefinite-delivery/indefinite-quantity contract from the U.S. Department of Homeland Security, U.S. Immigration and Customs Enforcement for HST bullets.

I seem to recall looking at that one and it also only guaranteed 1000 rounds in each of five years, which, of course, is likely to be well exceeded.  It may not be 450 million rounds over five years, but it's not bloody likely to be only 5000 rounds either.

Why does the National Weather Service need 46,000 rounds?  It turns out that was a mistake.  It's NOAA that's ordering it, so while NOAA runs the NWS, it also runs the NOAA Fisheries Service.


UPDATE, 1:07 p.m.: NOAA says there was a “clerical error” in the FedBizOpps announcement stating the NWS required ammunition. The solicitation actually originated from the “NOAA Fisheries Office of Law Enforcement” not the National Weather Service. See bottom of post for more details.

The NOAA Fisheries Service is the group that boards commercial fishing boats to ensure the encyclopedia-sized fishing laws are complied with.  While I don't imagine they're under much threat, that's easy for me to say.  Threat or no, though, I can't imagine federal agents going on any sort of law enforcement mission without overwhelming fire power.

The way I read it, this solicitation turns the number of lines (160-ish) into that number of contracts.  Like the previous contract, it is "indefinite-delivery/indefinite-quantity", with a guaranteed minimum 1000 rounds per year (and we all know how fast that goes).  It's more like saying, "if we need ammo, you're the company we're going to" than like saying, "put 10 million rounds on my dock by October 1".

Now if you have any real data, or know differently, I'm sure the readers here would love to hear it as much as I would.