I've only recently become aware of a young woman from Utah, mayor of the city of Saratoga Springs, and Republican candidate for the US House, Mia Love.  I heard the name within the last couple of months and saw her once on TV.  She's charismatic, poised, and presents herself well on TV.  I was impressed with her grasp of the fight for liberty and the America of our founders, quite possibly because she has lived it.  First, being from Utah, deep in flyover country where self-reliance and helping your neighbors are equally deep in the DNA, and second, from watching her parents build a successful business after coming to America from Haiti "with 10 dollars in their pockets".

Impressive, attractive young woman whom nobody knows, why not put her onstage?  So the Stupid Party gave her an early time slot as a speaker at the convention.  No, I wasn't watching, (I don't typically watch much of the conventions - as I've said before, I hate day to day politics) but apparently the Evil Party was, because Twitter soon began telling stories about her entry in the Wikipedia was being defaced.  As Twitchy reports...


Tuesday night after rising GOP star Mia Love brought down the house with her inspiring convention speech, the stomach-turning Left labeled the black conservative a “token” and an “Aunt Tom.”

Meanwhile, revoltingly racist, woman-hating Wikipedia vandals were hard at work updating her entry with disgusting slurs like “House Nigger” and “dirty, worthless whore.” The page called her a “total sell-out to the Right Wing Hate machine and the greedy bigots who control the GOP.”

Oh, yeah.  I guess I never mentioned she's black.  No "dog whistle" racism here, this is the real, putrid deal.

My black, conservative friends have tended to be engineers (for the last 30 years), so I haven't exactly watched them get ostracized at work or in their communities, but they've said they have family problems for not being liberal.  I certainly have read the same from many black conservatives online.  If you watch reactions to black conservatives, they get extreme amounts of hate dumped on them for "getting out of line" - literally "not knowing their place".  Remember when the leftist protesters outside a conservative summit openly talked about killing Clarence Thomas, or torturing him by cutting off his toes?  The Evil Party appears so determined to keep control over every black person in America that they get truly, viciously angry when blacks stray from the party line.  As more blacks realize what a bad deal voting straight Evil Party tickets has been for them, it will have to turn into a problem. 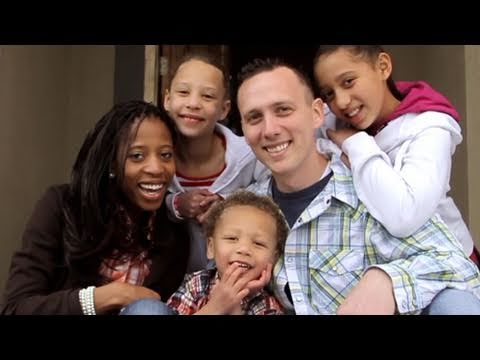 (Mia with her husband and family)
The speech, preceded by a few minutes of campaign commercial is here on YouTube, as well as her site (linked above).   It is good.

A little over two years ago, I wrote about how charges of racism - like the "dog whistle racism" oxymoron - is the equivalent of the Atomic Bomb of Argument.  Like being called a Nazi, it's supposed to get you so concerned about denying the charge that you go off your message and dispute the charge - a win-win for the opponent.  And I discuss why I don't believe there is such a thing as race.


This may shock some people, but I don't really believe there is such a thing as race.  I believe there are nationalities, and people from different areas of the world look different, but those differences are superficial and go away as cultures blend.

Most variation is within, not between, "races." Of the small amount of total human variation, 85% exists within any local population, be they Italians, Kurds, Koreans or Cherokees. About 94% can be found within any continent. That means two random Koreans may be as genetically different as a Korean and an Italian.  No matter how different you think the Italian and Korean look from each other.

Of course, when you think this way, the entire race-baiting industry goes away and that's a set of jobs the Evil Party will never let get away!